A group of US-based companies has launched an initiative to increase racial diversity across all fields of design through systemic change.

The Diversity in Design (DID) Collaborative announced its formation on 15 June 2021, outlining an immediate mission to increase the representation of black creatives across all design disciplines.

The initiative was spearheaded by US furniture group Herman Miller. It is co-led by the company's senior vice president of special projects Mary Stevens, and Caroline Baumann, the former director of New York City's Cooper Hewitt Smithsonian Design Museum.

They are joined by a group of founding advisors that includes D'Wayne Edwards, founder of Pensole Design Academy; Lesley-Ann Noel, associate director for design thinking and social impact at Tulane University; and Forest Young, chief creative officer at Wolff Olins.

"As a Black designer I have waited three decades to receive Herman Miller's call proposing the concept of DID," said Edwards. "The lack of diversity in design is too large an issue for one brand to try to solve itself."

"To me, DID is about more than purposely creating more diversity in design, it is about an entire industry creating a more meaningful relationship with a consumer that goes beyond them being a consumer," he added.

They include Adobe, Architecture Plus Information (A+I), Dropbox, Fossil Group, Fuseproject, Gap, Herman Miller Group, Knoll, Levi Strauss & Co, Pentagram, Studio 0+A and Wolff Olins – the full list can be found on the DID website.

All members have pledged to create more career opportunities in design for black people – within their own organisations and through partnerships – and to build education pathways, offer grants, and provide exposure to black youth entering the creative industries. 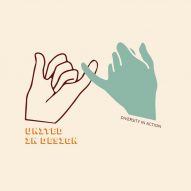 The collaborative aims to spend its first year recruiting more creative studios and corporations to join its mission, while sharing information and resources on potential programs and partnerships to explore.

Part of the initial pledge involves working together on a DID Design Fair in Detroit in 2022, which is to be used as a model for future events in other cities throughout the same year.

Immediate need to address lack of black representation in design

The collaborative's first directive is to address the lack of black designers in the workforce. According to its sources, 12 per cent of the US labour force identifies as black, but less than five per cent of designers employed on a full-time basis identify as black.

"As a professor of design, who has not taught any black students in the last two years, and only three students of colour in total, I'm very excited about this initiative," said founding advisor Noel.

"Access is an issue that we all can work together to overcome by creating many pathways into design for students of color, rural students, students with disabilities, and students who are facing barriers to access to great design education."

The DID logo was designed by founding advisor Young as "a simple story of three squares and a circle" to visualise the current status quo and reflect the work that needs to be done.

"The mark is a charge: our profession will only become legible when diversity is re-lensed as a beacon of industry," he said.

Young also provided creative direction for a series of illustrations to accompany the DID launch by Herman Miller art director Kelly O'Hara. The graphics celebrate historic designs by black designers: from a doorknob and golf tee to the inventor of automatic elevator doors.

The DID website strategy, design and development was completed by collaborative members Work & Co.

DID is latest move to improve racial diversity in design

The launch of the DID Collaborative comes a year after widespread protests over police brutality against black people, sparked by the murder of George Floyd, spurred a global movement against racial discrimination and inequality.

Since then, several initiatives have been set up to help promote racial diversity across the design industry, including United in Design and the Where are the Black Designers? conference.