Klein Dytham Architecture has created a decorative wooden facade featuring a pattern of interlocking three-dimensional blocks that are individually illuminated at night for a Cartier store in Osaka, Japan.

The store is situated on a corner of Shinsaibashi – the city's main shopping district – and shares an intersection with Apple, Nike and Burberry.

Klein Dytham Architecture (KDa), which is based in Tokyo, designed the facade to contrast with the metal and glass exteriors of the surrounding buildings.

The wooden facade wraps around the angled corner of the existing building, introducing a warm and textured element to the streetscape.

An entrance and windows on two sides were placed within double-height arches that allow views of both of the store's floors.

The facade is made from hinoki – a species of cypress native to central Japan. The wood is associated with the construction of historic temples, shrines and castles and was chosen for this project because of its warm tones.

The new facade is squeezed into a 200-millimetre zone between the existing building and the boundary line. A framework made from recycled aluminium was erected to attach the hinoki panels to the structure.

The use of recycled metal and domestically sourced timber is intended to emphasise the project's sustainable credentials.

"To create an environmentally conscious structure that reflects Cartier's involvement in responsible jewellery, KDa looked to renewable and recycled sources, as well as local artisanship," said the studio. 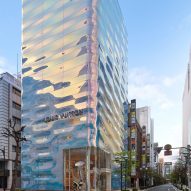 Craftsmanship was another key focus for the project, which aims to reference the jewellery brand's artisanal approach as well as evoking Japan's history of traditional crafts.

Seasoned hinoki wood from 60 to 70-year-old trees was used to produce slightly protruding diamonds in 12 different shapes. The wood, which is naturally stable and weather resistant, was treated with a clear lacquer to provide enhanced UV resistance.

Individual LED lights positioned behind each unit illuminate the structure at night, producing a pattern of light and shadow that becomes more distinct as dusk gathers.

"Diffused by the box-like diamond of each section, the effect not only increases the three-dimensionality of the facade, but gives it an inviting warm glow," the studio added.

Klein Dytham Architecture was established by Royal College of Art graduates Astrid Klein and Mark Dytham in 1991. The multidisciplinary studio's previous projects include a commercial building with a latticed facade that overlooks a busy intersection in Tokyo, and a clubhouse for a Japanese hotel featuring conical roofs that poke up above a forest canopy.

Photography is courtesy of Cartier.