It was badly damaged when it was flooded by the category three hurricane in 2017 and forced to close for renovation.

Weiss/Manfredi repaired the Baker Museum's facade using stone and metal to form a water-resistant barrier that should protect against future extreme weather events.

"The east-facing Trosselfels limestone was selected for its large panel format, low water absorption rate, and resistance to extraordinary dynamic forces such as hurricanes at a minimal thickness," explained the architecture studio.

"The west and north-facing facades are clad in two-storey bands of fluted metal with limited discreet apertures protecting the art galleries within the museum."

The studio added new glazing that is hurricane resistant, meaning it can withstand high winds and the impact of debris.

The landscaping around the Baker Museum was also designed to be able to absorb storm runoff. 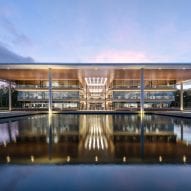 Along with the renovations, Weiss/Manfredi also extended the museum. It added a new entrance to the south by demolishing an existing conservatory to make way for a paved courtyard with a water feature and outdoor cafe.

A sculptural exterior staircase now links the ground to the first floor, leading to a new events space with a glazed lobby and private balcony that can seat 150.

"The Grand Stairway creates a sense of grandeur as patrons ascend and descend from the courtyard," explained Weiss/Manfredi.

"The stairway focuses attention on the museum's new lobby and draws visitors to the event space on the second level while providing garden views."

The Multipurpose Performance and Learning Center has been built on the ground floor, and the ticketing area and museum shop have been relocated to the lobby.

A rooftop terrace accessed via the second-floor gallery displays a sculpture collection and has views across the Gulf of Mexico.

Weiss/Manfredi also designed a new loading dock for the Baker Museum that can accommodate large trucks delivering valuable art in accordance with security standards set out by the American Alliance of Museums.

The architecture firm, which was founded in 1989, has also recently realised a study centre on the Yale University campus with a rippling glass facade.

The photography is by Albert Večerka.