Pocket courtyards are hidden within this concrete house by Chilean architects Duque Motta & AA, bringing light deep into the home and creating unexpected moments of greenery.

Dubbed Casa Altos, the single-storey home is located in Chicureo, a residential area outside of Chile's capital Santiago. The home is comprised of two rectangular volumes set at a slight angle, to provide residents with better views and solar exposure.

The 340-square-metre home's communal areas are within the larger of the two volumes, which guests enter under an overhanging concrete roof. In addition to marking the entrance, this protects it from the harsh summer sun, while keeping moisture away during the damp winter season.

The centre of this volume contains a landscaped inner patio, which delineates the living room, kitchen, and dining area. Glass walls on three sides create a sense of continuity between these spaces, while a picture window offers more selective views of the space from the kitchen side.

"The project's circulations are arranged around these patios, which act as spatial articulators, separating the different programs but visually linking them," said Duque Motta y Arquitectos Associados, or Duque Motta & AA.

Near the living and dining room, the facade is pulled back from the perimeter of the building, creating a shaded seating area. "The facade design is proposed based on a perimeter structure that responds to the climatic conditions of the place," the architects explained.

"This perimeter concrete structure formally defines the house," the firm added. This is most apparent at the corners of the home, where the columns have a distinctive angular profile. 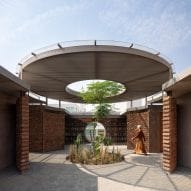 A covered walkway leads to the bedrooms, which are similarly laid out around an interior courtyard. Because of the floor plan's square proportions, these openings in the roof help to bring more daylight to the centre of the space. One of these openings in the building's roof contains a natural water feature.

The owner's suite, which includes its own bathroom, a walk-in closet, and a study, occupies half of this volume. On the opposite side, three bedrooms share a bathroom and lounge area.

Inside, wooden finishes contrast with the structural concrete that makes up the building's frame. Images of the project show an otherwise limited palette of materials.

"This structure seeks to build a facade with thickness and depth, using concrete with all its expression capacities," explained Duque Mota.

The Santiago-based studio completed a campus building for the Diego Portales University, using a similar language of a monolithic concrete structure enclosing a courtyard within.

Other residences in Chile include a low-slung cabin that was built using modular construction by Max-A and a waterfront retreat on bright red stilts located on the country's  Chiloe Island.