A 10th-century castle in the Umbrian hills has been restored and transformed into a hotel by Count Benedikt Bolza and his family, who created custom furniture for its 36 suites, restaurant and spa.

The hotel sits within the sprawling Reschio estate, which was acquired by Count Antonio Bolza in 1994. It lies on the border between Umbria and Tuscany and is dotted with farmhouses.

The crumbling buildings were slowly restored into private homes by his son Benedikt and daughter-in-law Donna, before they turned their attention to the site's impressive 1,000-year-old castle and surrounding structures.

The family lived in the stone "castello" for a decade while they worked to protect and restore the architecture, then create interiors that respect the ancient building while offering modern comforts.

In total 30 suites were built within the castle itself, with some rooms having views of the central courtyard garden, while others look out over the rolling hills.

A further six suites were built next to the parish church.

All of the rooms were decorated with terracotta-brick or wooden floors, hand-stitched linen curtains, Italian fabrics, and locally crafted marble and brass vanities.

Benedikt Bolza also designed and crafted bespoke beds and lighting for the hotel via his own furniture brand, BB for Reschio. These are mixed with portraits, photos and other curios sourced from local antique markets.

"Benedikt has embraced an organic approach to the design, championing local craftsmanship and creating thoughtful, whimsical spaces that are filled with comfort and wit, while artfully nodding to the fascinating characters who once resided within the castle walls," said the family. 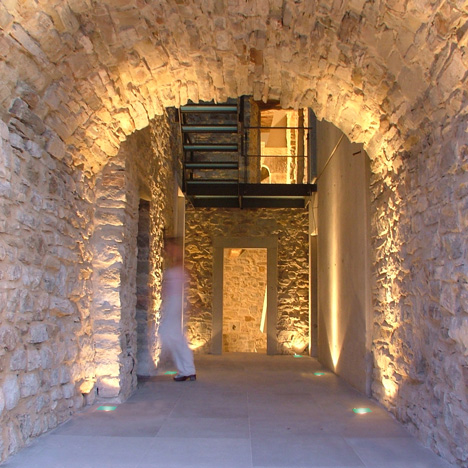 The Tower Suite, which is entered over the castle's gateway and spread over five levels, boasts two bedrooms, a living room, study, and roof garden with an open-air bathtub.

Dining options for guests include the Ristorante Al Castello, located in the castle's western ramparts and serving Italian dishes made with produce grown on the estate.

The verdant Palm Court is a new structural addition modelled on iron-and-glass Victorian conservatories, which is intended as a space for reading, conversation or enjoying cakes and cocktails from the adjacent bar.

Another alternative is Il Torrino, the converted watchtower that serves light fare and drinks, and overlooks an oval swimming pool.

The hotel spa is situated in the vaulted stone cellar, where hammams, saunas and plunge pools are atmospherically lit by shards of sunlight through the arrow slits and windows.

Guests seeking a more active experience can explore the estate on foot or bicycle, or take horse-riding lessons at the Equestrian Centre.

Many of the region's historic towns and cities are also a short drive away, for those who wish to explore further afield.

Castles and ancient buildings across Italy have been converted into guest accommodation while maintaining their original charm and character.

Another example, also in Umbria, is a 12th-century watchtower that was reconstructed and turned into a holiday retreat.