Studio Lotus has designed the Mehrangarh Fort visitor centre in Jodhpur, India, using a system of interconnected and adaptable decks.

Delhi-based Studio Lotus designed the visitor and knowledge centre for the city's 15th-century Mehrangarh Fort, which towers 125 metres above Jodhpur on a rocky outcrop.

Studio Lotus, which was founded in 2002, previously re-designed the shop inside the historic site and built a boutique hotel at the base of the fort, in the old quarter of Jodhpur.

Describing their approach as an "architectural system" rather than a set of buildings, Studio Lotus said they wanted their interventions at the historic fort to be as sensitive as possible.

"The towering edifice of Mehrangarh and its various outcroppings constitute a staggeringly intricate built character, as much a testament to the beauty of the built form as it is an embodiment of the region's culture and heritage," said the architecture studio.

"It was pertinent that any additions or modifications to this dense fabric enmesh with the existing," it said.

"The proposed intervention aims to do just that – through expressive and adaptable additions that make the most of modern construction technology, yet stand deferential to the historic site's timeless magnificence."

The Mehrangarh Fort Visitor Centre will create a new entrance to the monument, situated at the junction between a path that will run parallel to the main entryway to the fort and a plaza.

A modular roof of latticed steel will shelter the centre, which will be paved with stone slabs.

A knowledge centre, which will include exhibition galleries, seminar halls and community spaces, will sit on the north western ramparts overlooking Chokhelao Bagh, a restored 18th-century Rajput garden. 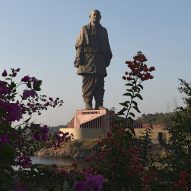 Interconnected decks will lead from the plaza to the knowledge centre, shaded by latticed stone screens known as jaalis, and more steel trellises.

Studio Lotus' proposal for the Mehrangarh Fort visitor centre is modular and easy to build locally, allowing for new pathways and platforms to be added or reconfigured as the uses of the historic site change.

Mehrangarh Fort, also known as Mehran Fort, is one of the largest and most spectacular fortified structures in India. It was begun shortly after the city of Jodphur was founded by Rao Jodha, ruler of the province of Mandore in what is today the state of Rajasthan, in 1459.

Construction continued for the following 500 years in a variety of architectural styles including Rajput and Mughal, with parts of its fortifications carved from the solid rock.

The huge fort is today one of Rajasthan's most popular tourist attractions.

Other architects working on visitor centres include Selldorf Architects, which is designing a visitor centre for a palace in Beijing's Forbidden City that has never been open to public before. In Norway, architect Reiulf Ramstad has designed a series of zig-zagging mountainous pathways for Norway's Trollstigen Visitor Centre.