British architect Alison Killing has become the first of her profession to win a Pulitzer Prize for reportage with a series of articles revealing a network of Chinese prison camps allegedly built to incarcerate Muslims.

Killing, who is an architect and geospatial analyst based in Rotterdam, is thought to be the first architect to win a prestigious Pulitzer journalism prize for writing rather than criticism.

She won the 2021 Pulitzer Prize in International Reporting together with reporter Megha Rajagopalan and programmer Christo Buschek.

Killing used her expertise in forensic analysis of architecture and satellite images of buildings to expose secret camps allegedly built by the Chinese state in the Xinjiang region to imprison Uighurs, Kazakhs and other Muslim minorities.

The detainment infrastructure was unveiled in a series of articles for Buzzfeed News, which were published from August to December 2020.

The Pulitzer jury awarded the team the prize for "a distinguished example of reporting on international affairs, using any available journalistic tool." Killing, Rajagopalan and Buschek won $15,000 for their work.

Killing identified the prison sites by comparing areas on China's map tool Baidu Maps with images from external satellite data providers and seeing which areas were blanked out on Baidu Maps.

An original list of over five million censored locations was narrowed down to 50,000. Killing then went through them by looking for compounds that might be camps before confirming 268 of them. 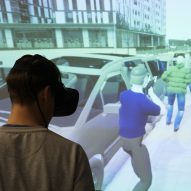 However, the Chinese Consulate in New York described the alleged detainment of Muslims as a "groundless lie" and told Buzzfeed News that human rights are protected in the centres and that "trainees have freedom of movement".

"The issue concerning Xinjiang is by no means about human rights, religion or ethnicity, but about combating violent terrorism and separatism," it said.

"Xinjiang has set up vocational education and training centres in order to root out extreme thoughts, enhance the rule of law awareness through education, improve vocational skills and create employment opportunities for them so that those affected by extreme and violent ideas can return to society as soon as possible," the consulate added.

Killing's background as an architect proved helpful in finding where the camps might be, she told Dezeen.

"It meant that I had a good knowledge of how to work with maps and satellite imagery and to accurately identify buildings and other objects when viewed in two dimensions from above," she said.

"It has also been invaluable in analysing the detention compounds," she added. "It meant we were able to produce a detailed 3D reconstruction of one of the camp buildings based on satellite imagery, construction knowledge and our interviews with former detainees."

Architects can make a "valuable contribution" to investigation of social issues

Killing believes that architects can play an important role in helping to investigate social issues.

"I think architects can make a valuable contribution to investigating and explaining the spatial aspects of these issues – those aspects aren't always well understood and our skills, in spatial analysis or construction knowledge, for example, aren't common outside our profession," she explained.

Killing's work has similarities with that of Forensic Architecture, a research agency that uses architectural techniques to reconstruct events spatially and has investigated events including the killing of Mark Duggan and the Grenfell Tower fire. 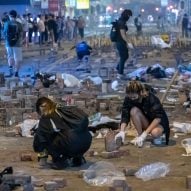 The Pulitzer Prize was founded by newspaper publisher Joseph Pulitzer, who made provisions for its establishment in his will in 1904. It gives out 22 awards split over two categories: Journalism and Books; and Drama and Music.

A Special Citation and Award is also given out each year and was given to Darnella Frazier this year, with the motivation "for courageously recording the murder of George Floyd."

Former Pulitzer Prize winners include Ernest Hemingway, Toni Morrison and John Steinbeck. In journalism, a well-known winner is The Washington Post for its 1972 investigation of the Watergate case.

These are Inga Saffron of The Philadelphia Inquirer, Paul Goldberger of The New York Times, Blair Kamin of Chicago Tribune, Robert Campbell of The Boston Globe and Allan Temko of San Francisco Chronicle.

A number of recent projects have used design and architecture to comment on political moments, including the Brick Arches roadblocks which won the People's Choice category at Designs of the Year 2020 and an installation of pink seesaws that connected children on either side of the US-Mexico border.