Terracotta tiles and reclaimed bricks clad the walls and roofs of this house in an inner suburb of Melbourne, which Austin Maynard Architects designed for a keen gardener.

The owner of Terracotta House approached Austin Maynard Architects to help her create independent homes on a shared lot for herself and her son's family.

Located in the Fitzroy area of Melbourne, the site consisted of a cottage and a garden large enough to accommodate a second property along with a shared library pavilion.

The project involved renovating the existing street-facing cottage where the son's family now live, as well as building a new house for the client with independent access to a laneway at the rear of the site.

In between the two buildings is a shared, productive garden that was a key element of the brief. This space also houses a library building that can be used for guest accommodation.

"Terracotta House is, essentially, a communal-living family 'compound' – akin to a village square, with the owner and her son's family living individually in homes on a shared block," said Austin Maynard Architects.

"As an architecture practice we always aim to maximise space, relate internal spaces to the garden, embrace the street and make the most of laneways," the studio added. "The site that [the client] Belinda purchased offered potential to achieve all of these ideas and more."

The existing timber-clad Victorian worker's cottage was renovated to retain its original character whilst making it better suited to modern living.

The interior was rearranged to bring the kitchen, lounge and dining areas to the front of the house so they look onto the north-facing garden and the street.

Internal walls were removed to improve circulation, with the new layout enhancing the connection with the front garden and verandah. A new kitchen and bathroom were installed, with private areas – including the bedrooms – moved to the rear of the house.

The library pavilion is positioned on the western boundary of the site and looks onto the shared garden. It incorporates a laundry space and toilet, along with a versatile room that is used as a library, guest room, writer's studio, music room and social area.

The new-build Terracotta House is positioned at the rear of the site and spans the entire width of the plot. It contains a kitchen, dining area, living room, bathroom and a study on the ground floor, with the main bedroom and ensuite upstairs.

The house is comprised of compact and connected volumes, planned to optimise the available outdoor space. The building's orientation and roof form maximise exposure to light and views. 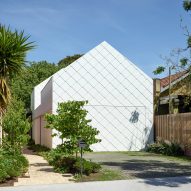 The house's materiality was informed by the owner's love of gardening and the terracotta pots she used to grow plants in at her previous home.

Terracotta tiles applied to the walls and roofs appear to take on different tones throughout the day. Their colour and texture complement the reclaimed brick used for other sections of the external walls and garden planters.

Due to a limited budget, utilitarian features such as waterproofing details that would typically be concealed are instead left exposed and are celebrated through an unusual material treatment.

"Rather than hiding the flashings and capping, we accentuated them," the architects explained. "Like the thick outlines of a comic book, each form is captured within lines of black steel of various thicknesses, framing and accentuating the tiles and the recycled brick."

The entrance from the laneway connects to a paved corridor that leads straight through to the garden. This hallways provides a sightline through the building that links it to the street and the community.

The kitchen and dining area are positioned to one side of the corridor, with the living room on the other. Both spaces feature doors that can be opened to connect the interior with the garden.

Terracotta tiles and reclaimed bricks are also used inside the house, where they form part of a pared-back material palette that also includes wooden surfaces and concrete flooring.

Wallpapers designed by indigenous artists for local firm Willie Weston are used in the kitchen and lounge to provide a sophisticated and delicate contrast to the raw, exposed brickwork.

The studio is based out of founder Andrew Maynard's home, which was renovated to create an exceptionally bright space that helps the mental well-being of its occupants.

The practice's previous projects include an extension to a residential terrace in Melbourne featuring a zig-zagging roof and a cylindrical wooden beach house in Victoria, Australia.