Design studio Beyond Space has created an office interior in Amsterdam that doubles as a showroom using rippling laser-cut fabric to form cave-like spaces for working.

Created for Siersema Interieur, a studio that specialises in fabrics, Beyond Space looked to the nearby IJ-river to inform the design of the office in the Netherlands.

The studio used one kilometre of semi-sheer fabric across the interior to create curtains with a rippling effect that mimics the movement of water.

Layers of fabric in a pale blue-green hue are hung vertically and draped from the room's high ceiling.

Six spaces are formed out of the multiple layers of fabric, including a collection of workspaces and meeting rooms organised around the edge of the space in order to maximise natural daylight.

The semi-sheer polyester was laser-cut at different lengths and shapes to prevent any potential fraying.

Openings and archways connect the workspaces, and the curtains are cut short around communal areas and left longer in more private zones.

The fabric was fitted with chord-weights in places to create the desired ripple effect.

"We made dozens of designs to get the proportion between closed and open space exactly right," Beyond Space founders Remi Versteeg and Stijn de Weerdtold Dezeen.

"The rooms had to feel spacious but also like they were carved out of the space, so either too big or too small didn't work." 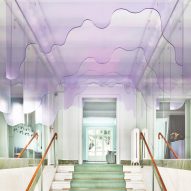 The sheerness of the polyester allows light to softly filter into the office and create different layers of transparency.

"Viewed from the front, it lets through light and adds various layers of transparency," said the architects.

"Viewed from the side, it allows for views towards the water in between the curtains, which have space between them."

"The colour of the curtain is light enough to avoid grabbing all the attention, but adds a subtle hue to the space which is reminiscent of water or ice."

A kitchen sits at the centre of the office, complete with a kitchen island and high stools. Pendant lights and pot plants decorate the space.

"The kitchen and storage are located in the middle since people spent less time there during the day," they said.

"In the evening, things turn around, and the kitchen transforms into the cosiest place of the office."

Elsewhere in Amsterdam, the studio created a flexible workspace for a security company using a colourful grid system.

More interesting offices in the city include colourful onyx bars across a hybrid office, store and cafe designed by Anne Claus Interiors for a media company.

The photography is by Peter Tijhuis.