The home has been designed to be a place for reflection and connection with nature, arranged around a series of existing trees to have as little impact on the woodland as possible.

Built into a hillside, the house steps downwards to create two levels: a lower one housing the living spaces and an open upper level of roof terraces, viewing platforms and a small garden.

Oriented to look down the slope, these terraces are shielded from the forest behind by high concrete walls.

Access is via a doorway that sits behind a perforated brick screen.

"The platforms of the house are sites of coexistence, reflection and connection,"  said Pérez Gómez.

"Below them, the sanctuary is hidden, with an intimacy that is part of the forest as well."

Informed by "stereotomic" architecture – meaning spaces formed by cutting and subtracting rather than adding – the board-marked concrete walls of the home are treated as a found object.

Guadalajara-based Pérez Gómez said the effect is intended to make it look as though the walls "emerged from the Earth".

Open staircases connect these terraces to the living level, with a larger wing to the east housing a living, kitchen and dining area and en-suite main bedroom.

Space for parking has been tucked away behind the concrete walls, and a simple driveway incorporating a cluster of existing trees leads out into the forest. 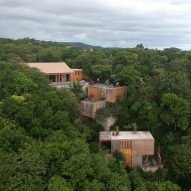 Treating the concrete form as a carved-out, cave-like space, the living spaces are divided internally by brickwork walls.

The corridor leading down to the bedroom wing frames these two materials opposite one another, illuminated by a thin skylight that runs along its entire length.

Full-height windows set deep into the concrete forms of the home with thin metal balustrades frame large, uninterrupted views out to the forest.

"Each of the spaces of the house enjoys a frank and different view of the forest, maintaining this connection with the forest at all times," added Pérez Gómez.

Other concrete houses in Mexico include Em-Estudio's design for a holiday home in Oaxaca, which also steps down a forested hillside, and Zeller & Moye's low-cost modular housing concept, built using concrete frames designed to be easily expandable.

The photography is by César Béjar.