The News Pavilion is a TV studio that combines virtual production technology and real-time filming techniques. A permanent news booth, where presenters and guests can gather around a table, is surrounded by LED screens and other augmented reality technology.

Softroom worked with the video game developer Epic Games to devise the concept, which was created using Epic Games' Unreal Engine display software. This generates the virtual environment in real-time.

"We wanted to explore what new opportunities for storytelling are possible, as well as creating a dynamic but sympathetic setting for the day's news, one that matches the sense of immediacy and importance of the subject matter," Softroom founder Oliver Salway told Dezeen.

The idea for The News Pavilion came about during the Covid-19 pandemic.

"The whole issue of teleporting-in remote guests sprang from conversations about what the legacy of lockdown might be, now that we're all so much more accustomed to video-conferencing," Salway explained.

"Thanks to Covid-19, it's ok now for a news show to have someone interviewed via their webcam, but we felt that there might be better ways to bring in remote contributors given the resources of a TV station."

"We wanted to see what we could bring to TV design with an outsider's perspective," said Salway.

"A lot of physical TV set design just doesn't look like anything you'd credibly see in the 'real world'. It's trapped in a sort of debased art-deco pastiche – a bit like a 1980s cruise liner."

On the left side of The News Pavilion is a news booth area where the presenter can physically sit at a desk. This section of the studio is the only permanent part of the design.

A pavilion with video walls encloses the studio, "extending the boundaries of the real studio". Cameras on wireless tracks film the newsreaders in live time and the video output is displayed live onto the LED walls. 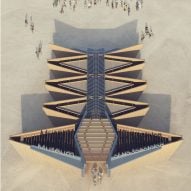 "A wrap around LED enables the physical set design to be digitally enhanced and extended, offering great flexibility in terms of graphic appearance and scale," Salway said.

"The LED display walls are linked in real-time to the movements of the camera, the whole extended space moves in totally convincing synchronisation with the changing viewpoint."

According to Salway, this means that newsreaders are more comfortable in the studio as they no longer have the "disorientating green screen," which showcases images to people watching at home but which can't be seen by the newsreaders themselves.

Instead, The News Room lets the presenters experience the final visuals.

"People in the studio see pretty much the final composited effect that the audience at home does," he said.

"So you can get much more natural ‘performances' from the presenters and guests in the studio, and they are able to interact with their environment, and with overlays of data, in much more fluid ways."

Alongside giving newsreaders more storytelling techniques at their disposal, Softroom wanted to ensure that regional or remote newsreaders were given the same visibility as in-studio newsreaders.

To do so, they "digitally extract" them from their off-site location and virtually place them into The News Pavilion.

"Thanks to the magic of virtual production, the remote guests are overlaid in the correct position in real-time on the video walls inside the studio," said Salway.

"So the hosts can interact much more naturally with them, and maintain an all-important sight-line to them," he continued.

"It was a reaction to feeling that studio guests and people on video link-ups are always a bit disadvantaged compared to the hosts."

The Covid-19 pandemic has prompted other designers to turn to virtual architecture and design. In November 2020, architecture studio Space Popular created Punto de Inflexión, a venue for the first-ever virtual reality architecture conference.