Called Green Lens, the kaleidoscopic catwalk is located on the Venetian island of Certosa.

Planters full of foliage have been placed between the faceted reflective surfaces of the 10-pronged pavilion.

"The installation is a living artwork," Aitken told Dezeen.

"I wanted to design something that was physically alive," he added. "Much of the work is botanic, it is actually vegetation, almost creating a lush forest-scape."

The decagon is made of Alucobond, a composite panel of two aluminium cover sheets combined with a fire-retardant.

During the show, smoke machines and colour-changing lights turn Green Lens into a shifting backdrop, soundtracked by nature sounds that were recorded on the island. 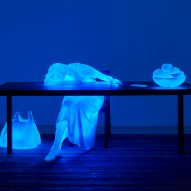 Doug Aitken creates "a portrait of the present" with luminous sculptures

Guests to the show sat on long white benches as models showcasing the collection walked through the reflective archways.

The installation will remain on Certosa Island until the end of July as an artwork in its own right for the public to experience, which Aitken said was crucial to the work's aim of being inclusive.

Aitken chose a reflective material for Green Lens to represent the idea of remaining in the present moment while reflecting on what the future might hold.

"I was working on this project for almost the entire of Covid," he said.

"I think that one of the things the pandemic did to us as a society was to really force us to look at the present, or the future, where we're going from here, and to question ourselves as individuals and as a society," he continued.

"I became very interested in the idea of an artwork really being a space for the present. A space for ideas for reflections, not looking at existing narratives but instead looking within oneself."

According to Aitken, Green Lens aims to ground visitors in the present moment and encourage them to engage with the physical object in front of them.

"I wanted to create an artwork that could be a tool to activate our perception," said the artist.

Saint Laurent said that carbon emissions related to the project will be offset through reforestation programmes dedicated to the island.

After the work is dismantled, the plants will be donated to the island, while the fashion house has also pledged to restructure damaged cloister ruins on Certosa.

"It was this little destroyed forgotten island," said Aitken.

"We wanted to create something there that would bring life back to it."

Doug Aitken is an American artist who works across a range of mediums. Other projects by Aitken that feature reflective materials include a mirrored building in the Swiss Alps that reflects a shifting display of scenery and sky.

Saint Laurent is a French fashion house founded in 1961 by designer Yves Saint Laurent and his partner Pierre Bergé. A museum dedicated to the designer in Marrakech was created by Studio KO.

The imagery is courtesy of Saint Laurent.