American artist Doug Aitken explores the nature of freedom in a world dominated by technology in his Return to the Real exhibition, which is on show at London's Victoria Miro gallery.

Comprised of two installations, All Doors Open and Inside Out, Aitken's latest exhibition aims to explore our rapidly changing relationships, both to one another and to the world around us, in a connected world.

Sculptural figures are brought to life by colour-changing lights that pulsate in sync with choral soundscapes.

The artist wanted to create an exhibition that was alive and continuously in flux. For him, this stands as "a portrait of the present", or the "near future".

"Much of the way we've seen art in the past is to look for it to be solid – to look for an image on the wall of something that we can view and judge and accept or reject," Aitken told Dezeen. "I wanted to create a very de-material exhibition, one that was very liquid and fluid."

"I was interested in slowing down time," he explained. "Taking an accelerated world and suddenly slowing it down like a freeze frame, allowing you to look and study and really contemplate the space that has been created around you."

"For me, return to the real is very much a modern portrait – it's a modern landscape and a portrait of the individual, now," the artist added.

Both installations feature a lone figure in the centre of a vast, open space, accompanied only by everyday objects such as a phone or a bowl of fruit.

Animated by lighting and sound effects, each room poses contrasting ideas of connectivity and freedom, collectivity and isolation.

"We are living in a new era, one of complete connectivity, where screen space has become seemingly equal to the physical landscape," said the artist.

"This surreal shift in evolution brings us into uncharted waters, a new frontier, one for which we are not fully prepared," he continued.

"These artworks question how we navigate a world of increasing speed and transition, the direction of where we can go and how we can confront the future," added Aitken.

In the ground floor gallery, a luminescent female figure sits slumped over a table, reaching for her phone. A fruit bowl is also positioned on the table, while a shopping bag is on the floor by the woman's feet.

Called All Doors Open, Aitken wanted to use light and sound to bring to life this everyday moment that takes place in a seemingly banal setting.

Each of the objects are hollow, made from translucent acrylic, and illuminated with a neon blue light that pulses in time to a backing track of layered vocals that echo throughout the space.

As Aitken explains, this could be interpreted as an "anticipation for information" – the figure is designed to look "caught in the midst of a silent moment".

Surrounding the figure are four lightboxes that contain abstract images of artificial landscapes made up of collaged photographs of commonplace objects, from aeroplane wings to beds and swimming pools.

Aitken describes the works as "landscape paintings of the 21st century", which explore the idea of repetition and variation. 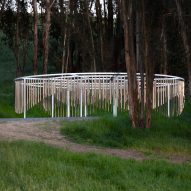 Sonic Mountain by Doug Aitken is formed from 365 wind chimes

Each lightbox is illuminated from behind, trapping the image inside the box to give the impression of being "suspended between the physical world and the world of the screen".

Up on the first-floor gallery is the Inside Out installation, where a sculpture of a young "modern" woman carved from Zebrino marble stands in the centre of the space.

While from the front, the sculpture looks whole, when viewed from the side visitors can see that the figure is split in half, with mirrors covering each of the inner surfaces.

These mirrored surfaces interact with a light wall positioned behind the figure, projecting kaleidoscopic patterns in shades of blue, pink and purple.

Reflective steel chimes hang from the ceiling around the figure, slowly rotating and playing music when activated.

"I wanted the raw, warehouse-style space to give an intense presence of the physical," said the artist.

"It almost feels like you've come out of the other end of a 'screen world', and have suddenly been ejected back into a physical space, but the physical reality is no longer the same as when you left," he continued.

"These are the ingredients of where we're going and where we are today," Aitken added. 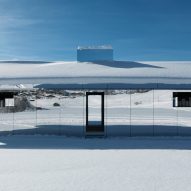 Aitken's Return to the Real exhibition is on show at the Victoria Miro gallery on Wharf Road in North London, until 20 December 2019.

The artist regularly uses mirrored surfaces and lighting effects in his works.

Previously he has installed ranch-style houses clad in mirrors that reflect its surroundings in both a snow-covered mountainous region in Gstaad, Switzerland, and in the desert outside Palm Springs.