Tokyo's Nakagin Capsule Tower, the 20th-century metabolist landmark by architect Kisho Kurokawa, is set to be disassembled and donated to museums or turned into rental units.

Located in the Ginza neighbourhood and built over the course of just 30 days in 1972, the housing block is considered a rare example of Japanese metabolism.

Much of the concrete and steel tower has fallen into disrepair and has been under threat of demolition since 2007.

Now, owners and residents of Nakagin Capsule Tower have decided to sell their homes and divvy up the capsules after attempts to find a buyer prepared to fund the restoration failed.

A module is already on display at Japan's Museum of Modern Art Saitama and the Centre Pompidou in Paris is reportedly keen to acquire one for its collection.

The owners are now crowdfunding to renovate the remaining 139 capsules so that they can be donated to institutions, or be relocated elsewhere in Tokyo and rented out to people who want to experience staying in one.

Formed of two interconnected towers made of concrete, the Nakagin Capsule Tower was built of 140 prefabricated steel modules bolted onto the main shafts.

Each module measures 2.5 metres by four metres and has a distinctive round window at one end.

The tiny homes were each fitted out with built-in furniture including a bed under the porthole-style window, cabinets, a kitchen stove and fridge, a telephone and Sony reel-to-deck recorder. A small bathroom even contains a tiny tub.

Kurokawa's vision was that each capsule could be rotated out and replaced every 25 years, to keep the building fresh, but problems with ownership and funding meant this never came to be. Instead, many of the capsules fell into disrepair. 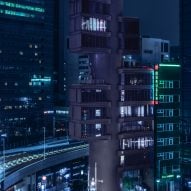 The distinctive tower was built as part of Japan's Metabolist architecture movement, which was pioneered by Kurokawa along with Kiyonori Kikutake and Fumihiko Maki.

As students in the 1960s the architects were influenced by Marxism, megastructures and social growth. Metabolism was named for the constant biological process that keeps a body alive.

Nakagin Capsule Tower embodies the ideals of Metabolism in the way that the cantilevered modules were designed to be swapped in and out, like the cells of an organism constantly renewing itself.

But this vision was never achieved and several of the capsules were abandoned or turned into storage units.

In 2007 the collective of owners announced they would sell to a developer who planned to demolish the building and build a new apartment block in its place.

However, the developer went bust in the 2008 recession, leaving the future of the tower uncertain.

In 2018 the owners started renting out the capsules on a monthly basis to architecture enthusiasts while the search for a buyer continued, until the coronavirus pandemic shut down negotiations.

Before Nakagin Capsule Tower is demolished, the residents association plans to undertake a survey of the building to be published in a book to record the architecture.

All around the world mid-century architecture is under threat. In the US, campaigners are lobbying to save Helmut Jahn's James R Thompson Center, while in the UK the 20th Century Society is campaigning to save a number of Brutalist buildings.

Photography is via Wikimedia Commons.