Icelandic artist Sruli Recht has created the Damage collection of 3D-printed shoes that are designed for extreme environments and to help with old age.

Created in collaboration with creative consultancy Industry, the collection is comprised of three pieces designed as extensions to the foot.

One pair of shoes can withstand flooding, another can be worn in extreme heat and the third pair helps to stabilise balance.

Recht added an elevated heel, a built-in cooling system and a stability feature respectively to make the shoes suitable for each extreme environment.

"The idea for this collection began with looking at the language of the functional aesthetics of footwear and how it evolves from its intended purpose through fashion," Recht told Dezeen.

"Watching the flooded streets of Venice with people struggling to perform shopping, the evenly cooled houses in the hotter climates, and the death of Leonard Cohen, this idea began to form: what will the most functional prosthetic footwear be for these extremes – flooding, age, and warming?" he recalled.

From this starting point, Recht asked himself what footwear could look like if it was "based solely on functional needs".

Venice Heel, which comes in two variations, is designed to fit over the wearer's usual shoe. Both the HiTide and LoTide versions have a platformed heel that allows the wearer to wade through floodwater.

"We watched in awe as the tides rose with increasing regularity," Recht said. "As the planet heated, we learned that not only did the polar caps melt, but warmer water actually expanded."

"Venice Heel looks at the swelling floods of Venice and imagines a shoe for walking in deep water," he added.

The Phase Change pair incorporates a built-in cooling system that helps the wearer cool down when in hot climates.

The designers studied the cooling effects employed by elephants and rabbits before applying the same science to the shoe's cooling system.

"Watching the elephants and the rabbits inspired a new breed of footwear that cooled the body through the large capillary skin areas," said Recht.

"The ears of these animals had very large veins so when the blood rant through it, it would cool down in its exposure to the air." 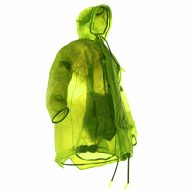 The team inserted a substance under the shoe that is liquid under 35 degrees and a gas at a higher temperature. When the wearer's body heat warms the liquid, it would prompt the cooling effect to occur.

"By running a series of flexible pipes under the hot footbed, the body heat would turn the fluid to a gas, which would then rise and flow into tubes on the outside of the shoe, thereby cooling outside the body," he said.

"It would then flow back down again to the footbed as a cold fluid, ready to continue the cycle, like an organism’s circulatory system."

To solve the "terminal balance problems" faced by many people in old age, Recht devised the Unbalanced shoe, a black sandal attached to a claw-like sole.

According to the designer, the unusual shape makes the wearer's brain "regulate the body" and prevent falls.

"The trick was found when we noticed that walking on unstable surfaces, like rocky ground, loose pebbled areas or sand, that when the body registered the uneven surface, the brain would create an automatic switch to re-regulate the body," he said.

"The solution came with a sensory prosthetic: a shoe that counter-intuitively created a balance regulation in the brain through presenting the illusion of instability."

Venice HiTide, Phase Change and Unbalanced have all been 3D-printed and finished by hand. All of the shoes have been designed to be an "extension of the human body".

"In each of the concepts, we take the body as the starting point and use it as a frame of reference to extend the functions already present."

Prosthetic design has been applied to other products to help wearers adapt to modern life. Industrial design student Minwook Paeng created Third Eye, a robotic eye that wearers can attach to their forehead while their real eyes are glued to their smartphone.

Photography is by Marinó Thorlacius.