Hidden behind an old train depot in the Wisconsin capital, The Harvey House is a 5,000-square-foot restaurant that nods to the Midwestern state's supper club culture of the 1930s and 40s.

American cuisine is served over two levels of the old baggage claim house, each with its own bar, which Home Studios renovated with the building's history in mind.

Additional dining spaces are located in a glass-enclosed area on one of the shuttered station's platforms, and in a 1960s train car that sits on the tracks.

Many of the building's original features were retained, including ceiling beams, windows, and the station's sliding wood doors.

The brickwork and dark green window trims guided the colour and material palette for the project, which includes dark woods and tactile upholstery, as well as custom millwork and commissioned artworks.

"Home Studios' primary design goal for The Harvey House was to create a warm and inviting restaurant that marries the familiar comfort of a Wisconsin supper club with a uniquely transportive experience evocative of the golden age of train travel," said the studio.

In the downstairs dining room, patrons can watch the chefs at work through a large opening to the kitchen. Wooden banquettes are cushioned with upholstered backs and seats in various tones of green.

Custom light fixtures reference those found in Paris metro stations, giving off a soft glow that adds to the moody ambience. 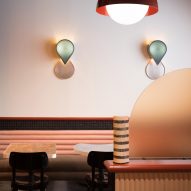 An open doorway leads through to the platform patio area, where black benches and rattan chairs accompany marble-topped tables.

Planting, string lights and vintage rugs give this space a more casual feel.

The decommissioned train carriage can be seen through the glass wall that runs parallel to the tracks.

Behind both of the restaurant's bars are works by local artist Jessica Niello-White, created specifically for The Harvey House.

Placed above the liquor selves and in the flanking arches, her images are based on scenes of the Wisconsin countryside as they might be seen from a train window.

Home Studios was founded by former book editor Oliver Haslegrave in 2009, with a focus on residential and hospitality interiors.

Previously completed projects include a cocktail bar in West Hollywood and an apartment in Manhattan, while the studio's range of collectible furniture and lighting debuted at Sight Unseen Offsite in 2017.