Kengo Kuma and Associates has used 164,000 metres of aluminium chains to create this mesh curtain that references the organic forms found inside Barcelona's renovated Casa Batlló.

The intervention by Japanese architect Kengo Kuma's studio is part of an extensive renovation of the house designed by the famous Catalan architect Antoni Gaudí in 1904.

Casa Batlló has recently been fully restored by the Bernat family, which has owned the house since the 1990s. The project also includes a series of contemporary interventions that aim to create a more immersive and engaging experience for visitors.

Kuma's contribution adorns the atrium and a new staircase connecting the ground floor with additional exhibition spaces created in a former coal bunker in the basement.

The curtain was produced using Spanish firm Kriskadecor's aluminium chains and pays tribute to the symbolic use of light throughout the house's unique interior.

It also envelops an emergency staircase that extends across the building's eight floors. Within this otherwise dark space, lighting developed by designer Mario Nanni reflects off the metal links to enhance their shimmering quality.

The curtain gradually changes from a lighter shade at the top to black as it descends into the old coal cellar, echoing the way daylight filters down through the building's central courtyard.

"We have imagined this space dressed in aluminium link curtains," said Kuma, "which with their meticulous materiality catch the light, as if they were fishing nets, and show it to us in all its forms: brightness, silhouettes, shadows."

"This way, by omitting the use of any other materials, and erasing the presence of this blind box and its staircase using these chains, we are able to speak of light and light only."

The curtain is formed of individual chain-link strands that are suspended from the variously inclined ceilings and surfaces underneath the stairs.

Computer software used to develop the scale-like pattern also ensured the precise positioning and length of each chain.

The staircase that descends to the newly accessible basement was designed by London-based firm Ancient & Modern. It is made from 13 tonnes of polished black marble that was carved on the underside to create an animalistic form reminiscent of Gaudí's own interventions.

The new basement houses 2,000 square metres of additional exhibition spaces, forming part of what is now called the "10D Experience".

As part of this endeavour to provide an unprecedented insight into Gaudí's mind, audiovisual producer Miguel Alonso has created an installation comprising a dome with 1,000 screens showing films about the architect. 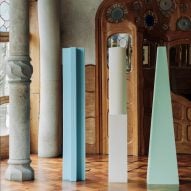 Casa Batlló was originally designed by Emilio Sala Cortés and constructed on the newly formed Passeig de Gracia in 1877.

The house was purchased in 1903 by Josep Batlló y Casanovas, who commissioned Gaudí to remodel the facade, interior and inner courtyard.

Gaudí collaborated with the best artisans of the time to transform the house into a work of art, using wrought iron, stone, wood, stained glass and ceramic tiles to decorate it in the modernisme style.

Earlier this year, while the house was closed to the public due to the coronavirus pandemic, local designer Max Enrich was invited to create a series of sculptural lamps for the interior.

The first house designed by Gaudí, which is also located in Barcelona and is called Casa Vicens, opened to the public for the first time in 2017 following a major restoration project.

Another of Gaudí’s most famous projects in the city, the Sagrada Família basilica, has been under construction since 1882 and remains unfinished.

The photography is by Jordi Anguera, courtesy of Kriskadecor.