Japanese studio Unemori Architects has completed a house in the city of Takaoka that is raised 70 centimetres above the ground on concrete stilts to protect it from flooding and heavy snow.

The owners of the House in Takaoka – a couple with two young daughters – approached Tokyo-based Unemori Architects to design a home that responds to the region's harsh climate.

The single-storey, 112-square-metre building is raised above the ground to reduce the risk of flooding from the nearby river, while also allowing for air circulation and protection from snow accumulation.

The house is built on a deep lot in an old district of Takaoka, flanked by a neighbouring property to the north and a warehouse to the south.

Unemori Architects was tasked with creating a building that faces away from its neighbours while incorporating large windows that allow maximum daylight to enter.

The firm divided the building into three parts with varying floor and ceiling heights, which helps to differentiate between the internal rooms.

The tallest space contains the main open-plan living area. Clerestory windows above the kitchen and a large opening in the adjacent wall allow natural light to flood into this room and provide views of the sky.

The living room is lined on one side by a tiled area resembling a traditional engawa – a verandah-like space between inside and outside. The floor height is lowest at this point to enhance the connection with the adjacent sheltered courtyard.

The main bedroom is positioned on the opposite site of the courtyard and is reached via a corridor lined with utility spaces including the bathroom and laundry room. 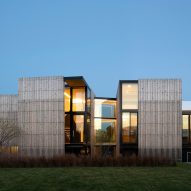 A separate volume adjoining the living room contains the children's bedrooms. This space is elevated above the others and is reached using a short set of cantilevered stairs.

The house is supported by reinforced-concrete piles that extend down nine metres into the earth and are intended to resemble utility poles where they emerge from the ground.

The concrete pillars support wooden roof beams that span the living spaces. The floors are suspended from the structure using steel rods, leaving the underside of the building free and unobstructed.

Japanese architect Hiroyuki Unemori founded his eponymous studio in 2009. The office focuses on producing buildings that appear simple despite often employing complex structural solutions, like an "earthquake-proof" community centre in Fukushima and a house on a tiny plot in Tokyo.

The photography is by Kai Nakamura.