Grand steel and micro-cement structures, celestial lighting and symmetrical layouts add a sense of ceremony to the shopping experience within this clothing boutique in Hangzhou, China by Liang Architecture Studio.

Located within a corner unit on a busy street in the city's Xiaoshan District, the 300-square-metre Audrey boutique sells women's fashion. Arranged over two floors, the store features a generous curved glazed facade.

The interior, designed by Liang Architecture Studio, follows the theme of "retro-futurism" – a movement that celebrates depictions of the future produced in an earlier era.

For the Audrey boutique, this is translated into symmetrical brutalist forms made from micro cement and steel that the designers said create a "church-like" feeling and "a sense of ritual".

To contrast with the coolness and rigidness of the concrete and metal, the studio incorporated soft fabrics and retro teak veneer into the design.

A semi-enclosed symmetrical display area with a rust-coloured carpet welcomes customers into the store. Here, a central seating area made up of five outward-facing seats is surrounded by curved concrete displays with rails.

Up above, a large diamond-shaped acrylic lighting fixture that changes colour pierces through the ceiling to create a dramatic focal point.

Towards the left of the space, a carpeted, rust-coloured steel spiral staircase with a glass balustrade connects the store's two floors.

The symmetrical concrete forms and orb-like lighting continue on the second floor, which hosts a VIP display area. 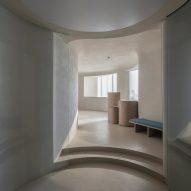 "The freedom of this space is not about visual effects but emotional expressions," explained Xu Liang, founder and design director of Liang Architecture Studio.

"Customers will be attracted by its atmosphere and be guided to perceive its attitude."

"Spatial design is a medium of communication," Liang continued. "For this project, the design team combined colours, structures and lights to create an ambience that resonates with people, hoping to provide diversified spatial experiences."

Other designers and architects who have embraced retro-futurism include Atelier Vens Vanbelle, which added an extension to a house in Belgium which it described as "a cocktail of science fiction and nostalgia."