British-Ghanaian architect David Adjaye has designed a bottle and oak case for the Gordon & MacPhail Generations 80YO whisky from Glenlivet Distillery.

The bottle was created to hold Gordon & MacPhail's 80-year-old whisky, which is claimed to be the oldest single malt Scotch whisky ever bottled.

The curved shape of each 70-centilitre bottle was handblown by Glencairn Crystal Studio to appear as if it was "hewn from a single solid block of crystal". A limited run of 250 bottles was created.

"The ambition was to create a vessel in which Gordon & MacPhail's unique experience and tradition is transmitted and incorporated," said Adjaye.

"The intricate and bespoke nature of this project was my most important design informant and inspiration," he continued.

"From this understanding of the whisky distillation process itself, I was able to unlock a design that allowed for a cohesion, where the lack of distinction between the vessel and what it contained created a complete experience."

Alongside the bottle, Adjaye designed a case described as an "oak pavilion".

It was constructed from oak to recall the material used to make the cask that the whisky was distilled in.

"The use of the oak – a relic of the production process and the bond between the cask and whisky facilitated something magical, an appreciation and understanding that the vessel and the liquid are non-distinct, encased and growing together," explained Adjaye.

"Oak is a primary material, produced from the planet. I appreciate its preciousness as an integral part of the whisky-making process," he continued.

"I wanted to create a design that pays tribute to the role oak plays in transforming liquid into an elixir with almost magical properties."

The vertical slats of timber on the front and rear of the case were designed to recall trees in a forest, while Adjaye hopes that opening the case will be a performance.

"The vertical struts of the outer pavilion are reflective of trees in an oak forest from which the staves of the original cask were hewn," explained Adjaye. 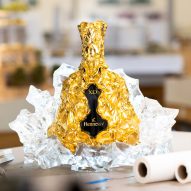 "A pivotal moment in the design narrative is the relationship between the light and shadow as the casing is opened and closed," he continued.

"The light refracted through the opened casing recreates the sunlight as it shines through oak trees within a natural forest setting. The act of opening the pavilion becomes a ceremonial and sensorial process."

Adjaye is one of the world's most well-known architects, with buildings including the Smithsonian National Museum of African American History and Culture, Ruby City art centre in Texas and Dirty House in London among his best-known projects.

To celebrate Adjaye winning the Royal Gold Medal we rounded up his 10 most significant projects.

The architect believes that his experience designing buildings helped with the creation of the bottle and case.

"Principles of precision and an exploration into materiality were key to unlocking a design for the case and decanter that would meet the same standards of the product itself," he said.

"Just like in architecture, the provocation here is to think beyond form."

"Instead of simply creating an object or a vessel to contain the liquid, I wanted to cultivate an experience that both embodied and celebrated the magic of this artisanal product," he continued.

"The ambition of the design was to cultivate a multisensory moment that would implore those lucky enough to consume this bespoke whisky to slow down and relish in the essence of its artisanal mastery."