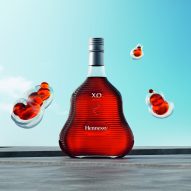 "Both architecture and product design require a dedication to honing your craft," said Gehry. "I visited Cognac and met the team in charge of making the cognac."