Children can play, hide and climb inside a series of sculptural spheres in a playground in Vårbergstoppen, Stockholm designed by Swedish architecture studio AndrénFogelström.

AndrénFogelström has decorated Vårbergstoppen, a park on a hill on the outskirts of Stockholm, with several colourful spheres.

The studio worked with landscape architecture practice Land Arkitektur to update the park, in a bid to counteract some of the urbanisation occurring in the park's suburban location.

"We wanted to make something exciting and unusual to inspire kids as well as adults to explore," studio founders Moa Andrén and Tove Fogelström told Dezeen.

"The idea came from a client who was inspired by the steep hill and the thought was that great balls would roll down the slope, almost as if a giant was throwing them," they continued.

A large orange sphere constructed out of perforated metal sheets sits at the top of the hill.

AndrénFogelström cut the metal into individual hexagons, before welding them together into the spherical structure.

The architects spent a long time working out how to make the structure look as though it were about to roll down the hill.

"It was an immense task during construction to make them fit together, and the structural engineer had a great deal of work just managing how to mark the pieces during the construction," AndrénFogelström said.

"It is a self-bearing construction where the parts support each other in the spheric form. It appears to be rolling down but is safely anchored to the ground," the architects explained.

Children and adults can enter the sphere through a circular opening to rest on its stepped wooden benches. At night, the sphere is lit by several small floor lights. Cables to the lights are threaded through the legs.

In the winter, the architects imagine that people will use the sphere as a starting point for sledging down the hill. 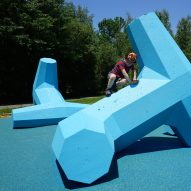 Breakwater in Jamestown is both a public playground and a sculpture

Three smaller spheres, which are positioned inside the playground at the foot of the hill, were made for younger children to play on and climb.

One sphere has a slide, another one has a little bench. All have small holes for peeking out of while playing.

Each of the spheres, which the studio thinks of as "little worlds," is made from wood which has been treated with linseed oil to increase its durability.

The frames, which stand on a block of concrete underneath the ground, are all made of steel.

The architects drew on the circular shapes Blom used, in an effort to honour his creation.

"The landscape was clearly designed, as the landscape architect who made the park in the 60s worked with forming the masses in geometric forms; the most significant one is a circular crater with a diameter of 100 meters," the studio said.

Other playgrounds that make use of playful, sculptural structures include The Folds by Atelier Scale in China which encourages children to explore in a more tactile way than usual.

Architecture office Studio Dlux created a multicoloured playground for children at a school in Curitiba that features curved mounds with tunnels for schoolchildren to climb through.

Photography is by Clément Morin unless stated otherwise.