Architecture office Studio Dlux has converted a former events space in Curitiba into a school featuring a multicoloured playground and a ceiling that looks like a starry sky.

Red House International School is a nursery and primary school in the city of Curitiba, Brazil.

"We designed the interior to align with the proposal of the school, which values the relationship between learning inside and outside of the classroom," Studio Dlux founder Denis Fujii told Dezeen.

Above the central corridor is a black vaulted ceiling flecked with white dots, intended to resemble a starry night sky.

"The transformation of the principal saloon into a starry-ceiling corridor takes the students to their classes and an outside space that used to be a big swimming pool," Fujii continued. 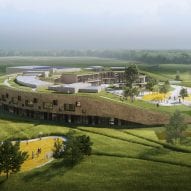 
This outside space features a rubber-floored playground of multicoloured shapes. Curved mounds with tunnels allow students to clamber over and climb through.

Inside, vividly coloured furniture such as orange and purple cabinets and a hot-pink fridge are set against white walls.

"We used predominantly light wood for the interiors, as it brings a warm and natural feeling to the school," said Fujii.

"Plywood is used for all of the woodwork and furniture in the school as everything was designed to be digitally fabricated in a CNC machine and made locally, only a few kilometres from the school," continued the architect.

Prior to completing the project, the firm had extensive meetings with Red School House's pedagogical team to determine how best to tailor the school's design in order to enhance its students' wellbeing.

Studio Dlux is a Brazilian architecture and design firm founded by Denis Fujii.

Photography is by Hugo Chinaglia.