Australian firm Tribe Studio Architects has created a U-shaped, timber-clad dwelling in New South Wales that is meant to serve as an "affordable and sustainable prototype home".

The Bundeena House is located in a coastal hamlet of the same name that borders the Royal National Park. The home sits about 100 metres from Gunyah Beach.

The low-scale dwelling serves as a weekend retreat for Hannah Tribe, who founded Sydney-based Tribe Studio Architects in 2003.

While designing the home, Tribe and her team took cues from the modest fisherman cottages found in the area. Their aim was to create a holiday dwelling that embraced its context while also serving as a reproducible model.

"The home doubles as a replicable architectural prototype for a sustainable holiday home that is authentic to the Australian aesthetic whilst also being cost-effective, environmentally aware and supportive of local trades," the team said.

U-shaped in plan, the houses consists of rectilinear volumes arranged around a courtyard. Instead of creating a multi-level building with views of the sea, the architect opted to keep the house at one level.

"We chose not to pursue a double-storey home to capture water views, in favour of tackling the larger challenge of creating an affordable and sustainable prototype home, with potential to be recreated across a variety of environments – from beach and bush to suburban estates," the firm said.

The single level also enables Tribe and her family to continue using the home as they age, while also being suitable for visitors who may have mobility limitations.

The home's structure consists of a concrete slab and a modular timber frame that achieves spans of up to 5.4 metres without the use of steel.

Exterior walls are clad in white-painted timber. The front facade has no windows – a response to the street layout and the need to block glare from approaching headlights. 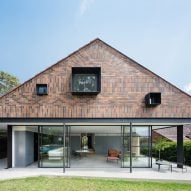 "While the house is conceived as a prototype kit-home, it also reflects some particularities of the site," the team said.

Inside, the home has bright rooms and a fluid layout. The public area consists of an open room for cooking, eating and lounging. Retractable walls provide a seamless connection to the outdoors.

The private zone encompasses two adult bedrooms and a kids' room that can sleep up to six children. A built-in sofa in the lounge can be converted into a bed, enabling the home to accommodate additional guests.

Instead of a dedicated mudroom, the team put the laundry in the entrance area — creating a "deliberate sand trap for beach towels, tossed togs, wetsuits and thongs". Interior finishes are meant to be durable and honest.

The only non-native plants are edibles in the inner courtyard, where they are protected from grazing deer. "Now the courtyard is the 'food bowl' of the house," the team said.

The home has an abundance of sustainable elements, including double-glazed windows, adjustable shading and heavy insulation.

The building is oriented to capture prevailing breezes, helping cool the interior on warm days. When temperatures drop, a Philippe Chemise fireplace is able to heat the entire home.

"Lighting is all LED," the team added. "A five kilowatt photovoltaic array, a separate solar hot water system, and provision for a future battery leans the home toward electrical self-reliance."

The dwelling also has a rainwater harvesting system, with recycled water being used in toilets, the washing machine and garden irrigation.

"This house is an attempt to achieve a high level of architectural and sustainable outcomes at a low cost," said Hannah Tribe. "It is an experiment in delivering a more thoughtful kit home."

Tribe Studio Architects has completed a number of residential projects in Sydney and beyond, including the drastic redesign of a 1920s dwelling, and the creation of a house with a clever pulley system for bicycle storage and retrieval.

The photography is by Katherine Lu.