Dezeen teamed up with Salone del Mobile to stream a live talk on the interplay of art and architecture.

Dezeen's collaboration with Salone del Mobile saw us live stream a panel discussion in its Open Talks series, curated by Maria Cristina Didero, every day this week during Supersalone.

The final talk to be live streamed was a panel discussion on the relationship between art and architecture.

On the panel was artist Carsten Höller and architect and curator Stefano Boeri.

The pair discussed how contemporary artists utilise architectural methods and the dynamics between the two disciplines.

Höller is an artist best known for installing slides in unsual locations around the world. His most notable installations include The Slide at the ArcelorMittal Orbit in the Queen Elizabeth Olympic Park, London, and Test Site, a temporary installation of giant winding slides in the Tate Modern’s Turbine Hall in 2006.

Höller is currently based between Stockholm, Sweden and Biriwa, Ghana.

Boeri is an architect and is the curator of this year's Supersalone.

Amongst his most notable architectural projects is Bosco Verticale, a pair of skyscrapers covered in trees that were completed in Milan in 2014. He was recently selected as president of the Scientific Committee of Forestami, a project that aims to plant three million trees in the metropolitan area of Milan by 2030.

Boeri was also appointed as director of the Future City Lab at Tongji University in Shanghai. The post-doctoral research program explores the future of contemporary cities through the lens of biodiversity and urban forestry.

The panel was moderated by Cecilia Alemani. Originally from Italy, Alemani now works in New York as a curator.

In 2011 she was chosen as the director and chief curator of High Line Art, a public art program in collaboration with High Line in New York. More recently she was appointed as artistic director of the upcoming 59th International Art Exhibition at the Venice Biennale. 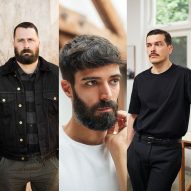 Live panel on radical design with Formafantasma and Philippe Malouin

This year's edition of Salone del Mobile, titled Supersalone, was curated by architect Boeri as a response to the coronavirus pandemic, which caused the cancellation of the 2020 edition.

Taking place in Milan in September rather than in its usual April slot, the special edition of the fair featured products displayed on a series of parallel walls instead of in branded booths.