A giant slide by Belgian artist Carsten Höller that spirals through the frame of the Anish Kapoor-designed ArcelorMittal Orbit opens to the public tomorrow.

Thirty separate sections comprise the Slide's snaking form, which twists itself around the sculpture's latticed structure. Measuring 178 metres in length, it claims to be "Europe's tallest and longest tunnel slide".

Beginning from the 76-metre-tall viewpoint, Höller's slide spirals downwards in a tight corkscrew before unravelling 50 metres from the ground. Riders can expect to reach speeds of 15 miles per hour during their 40-second descent.

The tube has a predominantly silver base but features a transparent top half, offering panoramic views of London's skyline to thrill seekers.

Visitors ascend the steel tower via a central elevator to reach the slide or viewing deck above.

The ArcelorMittal Orbit was created by artist Anish Kapoor and structural engineer Cecil Balmond as a key attraction for visitors during the 2012 Olympics. It is located in the Queen Elizabeth Park in east London, standing 114.5 metres tall – the tallest sculpture in the UK. 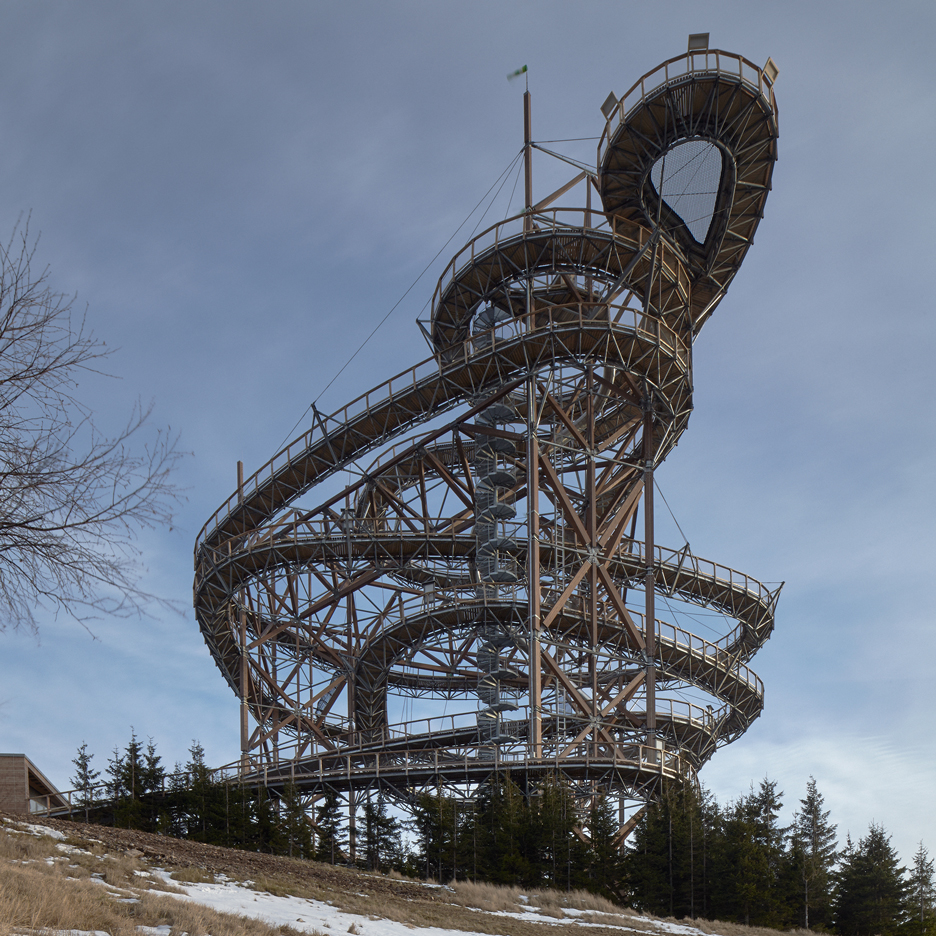 London-based firm Bblur Architecture – which also worked with Rogers Stirk Harbour + Partners on a bridge that spans the roof of the O2 Arena – oversaw the construction and planning on the project.

"It's so exciting that the final piece has been lifted into place," said Peter Tudor, a spokesperson from London Legacy Development Corporation. "The Slide at the ArcelorMittal Orbit will be an incredible experience and yet another reason to visit Queen Elizabeth Olympic Park."

Dezeen will be posting images and video content of people hurtling down the slide to Snapchat this evening. Use the code above to follow us and watch the preview.

Höller has previously installed slides at the Vitra Campus in Germany and the Hayward Gallery on London's South Bank.

Tickets for the Slide at the ArcelorMittal Orbit cost £10 for adults and £5 for children, and are available to book online.