Created by developer Knight Dragon, the cluster of workspace buildings aimed at creatives is located near the Rogers Stirk Harbour + Partners-designed O2 events arena, also known as the Millennium Dome, at the tip of the Greenwich Peninsula in London.

The development, which contains a variety of workspaces for 1,800 people, is made up of 16 buildings, with two buildings each designed by eight different architecture studios.

With the aim of replicating the variety of buildings and styles found within cities developed over a long period of time, each of the studios was not made aware of what the others were designing.

"The decision to involve eight leading architects was integral to our vision for Design District from the beginning," said Helen Arvanitakis, director of Design District.

"We were determined that it should be a dynamic, engaging and exciting piece of city – somewhere that jolts you into action, and spurs creative thought," she told Dezeen.

"This calculatedly eclectic approach undoubtedly created a possibility for clashes and contrasts, but we knew we had to embrace the risk if we were going to build somewhere genuinely innovative that would reflect and inspire the diverse creative community it was intended to serve."

Twelve of the buildings are arranged around the perimeter of the site with a square at its centre.

"I want them to feel that they're not in Kansas anymore; that they've stepped into somewhere distinct from the surrounding city," said Arvanitakis. "I want visitors to feel an urge to explore – to look around corners and linger in courtyards."

"By keeping the building low-rise, encouraging architectural diversity and avoiding the symmetry and predictability of the urban grid, we've ensured Design District feels as though it has developed organically rather than simply having been imposed on Greenwich Peninsula," she continued.

Directly behind the Gateway Pavilions are a trio of buildings – one each by Spanish studios Barozzi Veiga and SelgasCano and one by Architecture 00.

Barozzi Veiga's aluminium-clad building contains additional space for the nearby Ravensbourne University London, while Architecture 00's concrete-framed building is topped with a basketball court – one of several communal facilities for people working at the development.

Between these two buildings is a transparent structure by SelgasCano that contains the Design District Canteen, which is open to the public and contains a bar and six restaurants.

To mark the development, the words "design district" were written on a roof-mounted sign that recalls early US advertising signage on top of one of David Kohn Architects' two buildings.

Both of David Kohn Architects' buildings in the development combine vivid green metalwork with glass blocks and stout red-brick columns.

Alongside David Kohn Architects-signpost building stands a block by Adam Khan Architects, which has exposed concrete walls and yellow balconies.

In addition to the workspaces, a co-working space called Bureau occupies two buildings – the second concrete-framed building designed by Architecture 00 and a white building by HNNA with curved white walls.

The interiors of both buildings were designed by UK studio Roz Barr Architects. 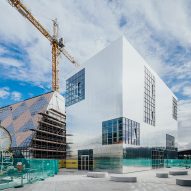 Also on the site are a pair of buildings designed by 6a Architects with angled facades that are decorated with diamond patterns.

Mole Architects' contribution to the development was a block clad in Corten steel and a building with a metal facade painted in an "iridescent" colour.

Developer Knight Dragon aims to develop a community of creative businesses in the Design District. To attract organisations to the development, it is offering the units at what it believes are competitive rates.

"Design District will deliver a site-wide blended-rent target of £25 per square foot. Starting at £7 per square foot, rents will be scaled depending on the workspace to be rented and the size and needs of the tenant, and will be reviewed regularly," said the developer.

"Larger organisations will be able to occupy buildings at rents commensurate to their size, in order to reduce the rental burden on smaller businesses," it continued.

"This rental structure is designed to create an ecosystem of businesses of varying sizes, each contributing according to its means, and ensure that any individual or organisation that wishes to be part of Design District can afford to find a home here."

Although the district is officially open, the final two buildings – one by HNNA and one by Adam Khan Architects are yet to be built as they have been delayed by the disruption caused by the construction of the Silvertown tunnel below the site.