The developers of the Design District in Greenwich have revealed visuals of buildings designed by SelgasCano, 6a Architects, Adam Khan Architects, Architecture 00, HNNA, Barozzi Veiga, David Kohn Architects and Mole Architects, that will make up the development.

Currently under construction on the Greenwich Peninsula in London, the one-hectare design district being developed by Knight Dragon will contain workspaces and workshops aimed at creative companies.

In total eight architects have designed the 16 new buildings that will make up the Design District alongside the RSH+P-designed O2 events arena, which was originally called the Millennium Dome.

Each architecture studio designed two buildings on the site, without knowing what the others were designing, with the aim of creating a development with a wide variety of styles.

"We felt it was important that buildings developed their own identities and that as people meandered through the district there would be a sense of discovery and surprise," he told Dezeen. "We were keen that someone would come to the district and say 'I want to be in that building'."

The development will contain workspaces for 1,800 people as well as communal facilities including a recording and broadcast studio, meeting rooms and a multi-sport rooftop court. 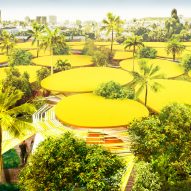 "When we looked at precedent projects and bits of cities that we liked in London and further afield, there was often a mix of architectural styles and we wanted to replicate this," said Dearlove. "It is not often that you are able to do this for a new build scheme."

"Cities are by their nature contrasting, complex and characterful. We purposefully picked architects that would have a contrasting style that would create diversity and discussion – that's what great cities are about."

According to Dearlove, asking the architecture studios to design without knowing what the neighbouring buildings would look like has created various connections that were not considered as part of the masterplan.

"By asking the architects to work blind and develop the individual opportunity of their plots, the design process created moments which we could not have anticipated in the masterplan stage – for example 6a architects sloping back the facade on its building created a view from Barozzi Veiga's building, which a straight facade would never have allowed for," he explained.

This methodology could have created a confused development, but Dearlove believes that the combination of a single masterplanned and unifying public realm, designed by landscape architecture studio Schulze + Grassov, makes the scheme coherent.

"While the architectural styles are different, the masterplan was a single hand – Hannah Corlett, director of HNNA, previously Assemblage – which means that the urbanism, massing and individual plots were carefully considered before the architects were briefed," he said.

"This means that there is a consistent approach to the district as a whole and the spaces created by the courtyards and main square," he continued. "The public realm and planting, as well as the catenary lighting and street furniture, is consistent with the landscape design unifying the district, while allowing a platform for the architects to shine."

The district is set to open in September 2020. It forms part of Knight Dragon's £8.4 billion development of the Greenwich Peninsula development, which is being masterplanned by architecture studio Allies and Morrison. It will include a three mile long raised park designed by Diller Scofidio + Renfro in collaboration with Neiheiser Argyros and Santiago Calatrava's first major UK project.