Hundreds of migrating birds have died this week in New York City after crashing into glass skyscrapers, according to local organisation NYC Audubon.

By the end of her shift at the World Trade Center site, volunteer Melissa Breyer said she found 226 carcasses, though many more were "inaccessible, or too mangled to collect".

"When you have 226 dead window-struck migratory birds from one morning, it's hard to get them all in one photo," she wrote on Twitter.

Some of the 226 dead birds I picked up this morning while window collision monitoring for @NYCAudubon. 205 from @3NYWTC and @4WTC alone. Many others swept up, inaccessible, or too mangled to collect. 30 injured to @wildbirdfund. If you’re in NYC today, be careful where you step. pic.twitter.com/RTjm82NIpy

A combination of stormy weather and artificial night-time lighting in cities are to blame for Tuesday's mass bird death, reported the National Audubon Society.

This is because both city lights and storms can confuse birds in nocturnal flight, leading to exhaustion from disorientation and in turn, building collisions.

However, Breyer added that some of the migrating birds that died had collided with the towers in the daytime, after confusing reflections in the glass facades for open sky.

Of the 74 window-strike patients we received during Tuesday's mass bird collision event, 27 were black-&-white warblers, including this beauty. They are migrating through the city in huge numbers, and if you're in a park right now, you're likely looking at one.

"Lights can be turned off, windows can be treated. Please do something," she pleaded.

Silverstein Properties, the developer of 3 and 4 World Trade Center, provided a statement to the National Audubon Society that said it is now "actively encouraging our office tenants to turn off their lights at night and lower their blinds wherever possible".

New York considered among most dangerous cities for birds

While this week's death toll was particularly high, glass towers in New York long been considered dangerous to birds.

Volunteers with NYC Audubon regularly patrol the streets during the spring and autumn migrations to document bird deaths, previously reporting that over 90,000 birds collide with buildings in the city every year. 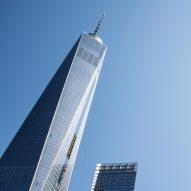 Another study published by Cornell Lab of Ornithology in April 2019 ranked New York as one of the most dangerous for birds in the US, alongside Chicago and Los Angeles.

"Building collisions, and particularly collisions with windows, are a major anthropogenic threat to birds, with rough estimates of between 100 million and one billion birds killed annually in the United States," the report said.

For this reason, New York passed a bill in December 2019 to ensure all new glass buildings are safer for migratory birds. This requires structures over 23 metres (75 feet) to be patterned to make them more visible to birds.

More recently, the US House of Representatives agreed to limit the amount of glass used across federal buildings. This was also in a bid to protect birds from death by collision.

The main photo is by Jonathan Roger via Unsplash.