Dezeen has been named Best Small Digital Publisher of the Year and scooped three other prizes at the Association of Online Publishers' annual awards ceremony.

Dezeen also claimed the Best Digital Publishing Innovation award for Virtual Design Festival (VDF) and the Best Content Marketing Campaign award for our Out of the Box collaboration with Samsung, while our sales team was named Sales Team of the Year.

The wins mean Dezeen walked away from the ceremony with more awards than any other company.

Judges for the AOP Digital Publishing Awards praised Dezeen for "turning disaster into innovation" in the wake of the coronavirus pandemic. "Dezeen created new products and brands that attracted big audiences and strong reviews," they said.

One such innovation was VDF, the world's first online design festival, which was conceived and delivered in the first few months of lockdown.

"This company was honest about the challenges it faced, pivoted at speed, created a property that will have real value, and executed its strategy really well," the judges said.

The judges also praised Dezeen's sales team for its role in making VDF a commercial success "when faced with significant adversity" and commended the Out of the Box competition for being "impressively creative and innovative".

The four accolades follow Dezeen's success earlier this year at a pair of awards programmes organised by the British Society of Magazine Editors (BSME). 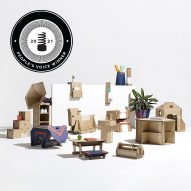 Earlier this year, Dezeen also won a People's Voice Webby Award for the Out of the Box competition with Samsung, which challenged contestants to create objects for the home by repurposing television packaging.

With eight awards this year so far, Dezeen has now beaten the six awards that we won in 2020, which along with record traffic contributed to our best ever year.