UK-studio Tsuruta Architects has completed a housing project in south London called The Queen of Catford, which features thousands of cat faces and a pair of blue heritage plaques dedicated to fictional characters.

The Queen of Catford consists of five quirky apartments located above and behind a pair of shops on Catford High Street.

An estimated total of 27,620 feline faces feature both inside and outside the homes, in the form of laser-cut perforations, door handles and embossed details.

The properties are also dotted with references to two characters, Katherine Ford and Raven Bjorn, a pair of fictional roommates whose lives are intertwined with local history.

Tsuruta Architects designed the scheme for the Catford Regeneration Partnership, a subsidiary of Lewisham Council with the aim of revitalising the Catford Shopping Centre and its surroundings.

The task given to him was to convert a pair of existing terraced houses and infill the space behind, which back onto a car park.

"The brief was to be a catalyst for the regeneration of the area," architect Taro Tsuruta told Dezeen. "It was quite a naive brief and I took it seriously."

It was this that prompted Tsuruta to start thinking about cats. The name of the area, Catford, is a reference to wild cats that once populated the area. This history is already reflected by a huge black and white cat sculpture that famously features in the town centre.

Given free rein to experiment, Tsuruta decided to create more cat references in these five flats. He developed a simple motif of a cats head, complete with pointy ears, which he used to create all of his decorative details.

Taking this idea even further, he also worked with writer Chris Roberts to create a fictional narrative exploring Catford's history.

The story centres around characters Katherine Ford and Raven Bjorn – named after Catford and the local River Ravensbourne – who started their careers in Catford's once-thriving theatre scene and went on to become showbiz stars.

Extracts of this narrative can be found on the blue plaques, which claim to be issued by Heritage of Catwanda, as well as in laser-cut details inside kitchen cabinets.

"This may be a small project but it captures some big ideas that are linked to both Catford's regeneration and also the history of the area," said Tsuruta.

"We tell stories to record impressions of a place and architecture can be a part of this as well."

The five flats are all accessed via an external staircase, which sits adjacent to an alleyway on one side of the property. Many of the cat faces can be found here, in the perforations of the staircase enclosure and as bright red door handles.

Due to the complexity of the site and the existing elements of the building, each flat has its own unusual layout. Three are located on the first floor, with a further two on the levels above.

To make the most of space, and to bring efficiency and cost savings to the build, Tsuruta has fitted out each of the homes using digital fabrication.

It is a tactic he has used in previous projects such as House of Trace and Marie's Wardrobe.

Kitchen cabinets, closets, furniture, lighting fixtures and staircases were all made using CNC-cut plywood. This helps to give the homes a unique design character, with highlights including floor-to-ceiling room dividers, space-saving staircases and striped wall panelling.

Cats faces are etched into cupboard doors, onto the walls and also form coat hooks.

The two upstairs flats both feature mezzanine levels with huge windows, offering views of the brutalist architecture of the Owen Luder-designed Catford Centre.

On the level below, one of the apartments features a narrow roof terrace, while another features a balcony overlooking the alleyway. 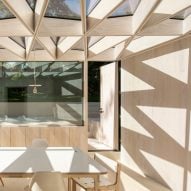 These additions, along with a new window for one of the shops on the ground floor, increase natural surveillance over an area that has been a hotspot for crime and drug use.

Tsuruta's aim was to make the space feel like a small boulevard, rather than a dark alley.

The flats are now being rented out, to help raise funds for Catford's wider development. Tsuruta hopes they will appeal to a design-savvy audience.

"Hopefully, people will be attracted to the whimsical spirit of this project and see how it represents a love of the area," he added.