Local studio Fox Johnston has renovated a heritage-listed modernist home near Sydney, stripping it back to an exposed concrete shell to create bright, open living spaces.

SRG House is a conversion of one of two semi-detached homes designed in 1972 and once the home of Australian modernist architect Sir Roy Grounds – from which it takes its name.

Overlooking the Parramatta River in the Balmain suburbs, the 1970s building was designed by Stuart Whitelaw, an architect and teacher at Sydney University who was commissioned by Marr Grounds, the son of Roy Grounds.

Originally a two-bedroom home with a later garage extension, the building has been transformed into a four-bedroom home for Fox Johnston director Conrad Johnston and his family.

The zigzagging plan of the home encloses a series of small courtyard spaces, overlooked by a grid of timber-framed windows between the pillars of the concrete structure.

"The original grid set up a powerful rhythm. How we unlocked the design is by interweaving old and new," said Johnson.

The poor condition of many of the finishes required the structure to be stripped back to its concrete frame, which has been left exposed and supplemented by a new palette of materials drawing on the original 70s fittings.

The fixed glass and rotted timber frames have been replaced with cedar-framed, high-performance glass, and the external timber cladding has been replaced with heat-modified Radiate pine, with new openings in the grid creating balconies over the courtyard.

Improving the environmental performance of the building meant that a commercial-scale air conditioning unit on the ground floor could be removed, creating space for two new ground-floor bedrooms that look out onto the central garden space.

Above, half of the first floor is given over to a large kitchen that flows into a dining area and living room with a concertina glass door that allows it to completely open out to views of the river. 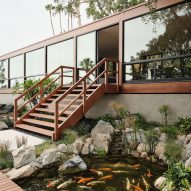 On the second floor, two large bedrooms sit at either end of the home, to the west overlooking the river with another concertina window and to the east looking onto a rooftop garden atop the new garage extension.

This extension sits atop a garage added in 1983, which has now been extended to create an additional storey of independent living spaces for Johnston's extended family, clad in contrasting white brick.

In the interiors, the rigid geometry of the home is contrasted by curved plywood elements such as a curved dining banquette, complemented by brass details.

"Working within that original geometry, we applied a softer edge in the form of curves. It's more overt in the new apartment above the garage building, and less obvious in the main house," explained Johnston.

Cork flooring has been used to add what the studio describes as a "retro texture and warmth", while the bathrooms have been finished with red Japanese finger tiles in reference to the original tiles found on the site.

SRG House was recently shortlisted in the house interior category of the 2021 Dezeen Awards. Shortlisted in the same category is a cave-like house embedded in a hillside overlooking the Mediterranean Sea designed by Mold Architects.