The company plans to open workspaces in its various office locations around the world.

However this one, located on the 10th floor of a new building complex in Shibuya, will serve as the testbed for ideas.

The name, Pangaea, was the starting point for the design – Pangaea was a supercontinent during the late Paleozoic and early Mesozoic era that broke up to create today's continents.

Digital Garage wanted to create a space that encourages people of different cultures and backgrounds to come together and collaborate.

"As a boutique office space for digital nomads, the space commemorates a time and place where geographical, political, and national constructs were not an obstacle," said Snøhetta.

This concept led the designers to fill the space with "super furniture", rather than adding individual tables or desks.

Two large wooden objects curve through the entire space, serving various different functions. They incorporate both seating areas and surfaces, so they can be used by numerous people simultaneously.

"Constructed as a metaphor for both tactility and fluidity, the super furniture encompasses all core functions of a co-working space: a reception, an amphitheater, phone booths, meeting spaces and individual workspaces," said Snøhetta.

"The furniture also prompts its users towards a greater vision through daily interactions with the co-working space and one another."

Both elements are crafted from Japanese cedar, a material chosen to give the room a natural scent.

Otherwise, the room is kept very simple, with only a few other furniture elements. 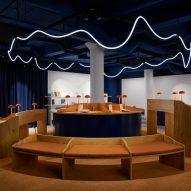 Seating is provided by chairs and stools that match the dark tone of the flooring, while 534 suspended light bulbs give a topography to the ceiling.

The space is framed by linoleum-fronted cabinets and acoustic textile wall panels, which together create an abstract image of Mount Fuji as a backdrop.

While Snøhetta is best known for its architecture projects, which include an underwater restaurant and the Oslo Opera House, the firm has worked on numerous interior design and branding projects in recent years.

Other examples include physical and digital retail spaces for fashion label Holzweiler and Oslo pop-up A Better Place to Think.

For Pangaea, the studio also designed a set of logos that are used on the facade, for signage and wayfinding inside the building and on the website.