Architecture studio White Arkitekter has completed Sara Kulturhus Centre, a timber development featuring the world's second-tallest wooden tower, which it claims will be carbon negative over its lifetime.

The project follows a 2020 pledge by the Swedish architecture studio that by 2030, every building it designs will be carbon neutral.

Sara Kulturhus Centre was designed to be a landmark destination in the city, which is just south of the Arctic circle in northern Sweden.

"We designed Sara to become a landmark in Skellefteå, marking the most central location of the city," said White Arkitekter partner Robert Schmitz.

"The building is planned to add life to the city centre, opening on all sides to show both public spaces but also the work behind the scenes," he told Dezeen.

The mass-timber building contains the Skellefteå Art Gallery, Museum Anna Nordlander, Västerbotten Regional Theatre and the city library on its lower levels and is topped with a 20-storey hotel.

At 75 metres tall, it is the world's second-tallest mass-timber building, just 10 metres shorter than the 85-metre high Mjøstårnet building by Voll Arkitekter in Brumunddal, Norway.

"Sara is an open and accessible culture centre that brings four cultural institutions together with a hotel under one roof where they can function together," said Schmitz.

"The building is composed of a series of volumes of varying transparency, that mitigate the scale from the existing buildings up to the tall building facing the main square."

The timber used within the building sequesters twice as much carbon as the embodied carbon emitted during the building's construction, the architect claims.

The studio carried out a 50-year lifecycle analysis that took into account the embodied carbon emitted during the building's construction and operation, the carbon sequestered in the timber and the emissions over the building's lifetime.

They also took into account the amount of new timber that will be grown over this period to conclude that overall, the building sequesters more carbon than it emits. 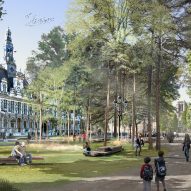 "This is why we claim that the building is carbon negative."

White Arkitekter carried out a 50-year lifecycle analysis that claims that Sara Kulturhus Centre will have a lifespan of at least 100 years.

"In terms of lifecycle assessments, new trees have to be planted to replace the ones harvested for the cultural centre in order to be able to count as carbon sequestration," he continued.

"New trees will grow during the building's lifespan. That is why we refer to the 50-year lifespan in our calculations."

White Arkitekter chose to design the building's structure from engineered timber to take advantage of locally grown wood, which was processed at a sawmill around 30 miles from the site.

"We chose to work with a timber structure to make the building as sustainable as possible, the forest being an abundant local resource, and to build on the local timber knowledge and tradition from century-old houses to modern-day engineered timber," explained White Arkitekter partner Oskar Norelius.

"The structure is exposed to show the construction and shape the interiors," he told Dezeen.

While the tower's structure was entirely made from CLT, the studio combined CLT with glulam columns and beams to create the large open spaces needed for the cultural buildings on the lower floors. Steel structural elements were also used to create the spans required for the theatres and large, open foyer space.

"The building is designed with material optimisation at its core, using the right material at the right place," said Norelius.

"For the large spans of the foyers, we designed bespoke trusses where timber is combined with steel. Considering various hybrid systems for slabs, the final construction is almost entirely made from timber."

A geothermal heat pump and 1,200 square metres of solar panels on the building's roofs will provide the majority of the power to the building, while the remainder will be supplied from renewable sources.

White Arkitekter hopes that the building showcases how the carbon impact of buildings can be reduced or negated. 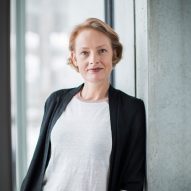 "Our goal has been to create a building that serves its purpose to the fullest as a living culture centre with a minimal impact on climate," said Norelius.

"Reaching carbon negativity means this is a great step towards a more sustainable construction industry, while building a greater city and exciting spaces for people," he added.

"The building, being a landmark in the city, it was important to create a showcase for sustainable construction."

At a Dezeen talk in Stockholm in 2020, White Arkitekter CEO Alexandra Hagen pledged that every building the studio designs after 2030 will be carbon negative.

"Climate change is the most important challenge for the future for this decade," said Hagen, who is a judge for the 2020 edition of Dezeen Awards.

"We know that the materials used for products and for buildings are the major cause of carbon emissions," she added.

The photography is by Patrick Degerman, unless stated.