Black granite, terrazzo, and concrete all contrast the lush vegetation at this compound on Mexico City's elite Paseo de la Reforma, which houses the official residence of the Swiss Ambassador to Mexico.

The residence of the Swiss Ambassador in Mexico City was comprehensively renovated by Swiss studio Fruehauf, Henry & Viladoms (FHV) in collaboration with local architects Blancasmoran. Originally built in 1952, the property no longer met the functional, security, and seismic requirements of the residence.

Located in the upscale neighbourhood of Lomas de Chapultepec, the property is sited on a steep slope that leads down to a stream below.

The land is lush with vegetation, a feature that the team sought to highlight in its design.

From the busy street, the building is protected by a seven-metre-tall concrete wall. "A horizontal folding gives it an austere, intriguing and sophisticated presence," the architects said in a project description.

The compound is entered via a courtyard that leads to the house. Each of the rectangular volumes that make up the home is angled relative to the street, unlike the neighbouring buildings, which follow the city grid. 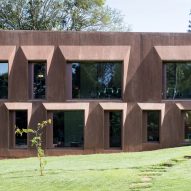 Terrazzo was used for the exterior and interior floor finishes, lending a sense of continuity between the courtyard, the residence, and the terraced garden beyond. This uniformity is enhanced by an abundance of vegetation in all spaces.

"The vegetation is lush," said the architects. "It is omnipresent on the path leading from the access courtyard through the house and to the garden below."

Within the home itself, service spaces are housed in monolithic black granite blocks that delineate and organise the main programme areas.

The ground floor contains a variety of communal areas, including a long dining table for hosting formal dinners.

Both the dining room and living room feature operable glass walls that open to the back of the property, where a large staircase brings visitors down to the dense gardens below. 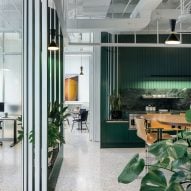 Chicago's Swiss Consulate interior is a nod to 1960s modernism

"It is difficult to distinguish the boundary between interior and exterior, which is reduced to the large floor-to-ceiling windows that define the living spaces," the team added.

The upper level contains five bedrooms, which are similarly housed in black granite volumes. They receive natural light via full-height glass walls. In the interstices between the bedrooms, a variety of spaces such as a secondary living room and a kitchenette provide more flexibility to residents.

"Between the blocks are the common living areas where the visual relationship with the outside is continuous," the architects said.

The first floor slab and the roof project out significantly from the living spaces, creating deep overhangs that provide shade to the living areas.

Interiors were finished with a palette that matches the restrained vocabulary of the exterior. Eucalyptus wood joins with the other materials to provide a touch of warmth in bedrooms and other private areas.

A similar minimalist aesthetic can be found in other Swiss diplomatic posts around the world. The country's embassy in Nairobi features pigmented concrete walls, while its consulate in Chicago has interiors that nod to 1960s.