Swiss studio Roeoesli Maeder Architekten has built anembassy for Switzerland in Nairobi, Kenya, as an extension of the dyed concrete boundary wall that surrounds the compound.

The concrete building is built in a prominently wealthy residential area of the Kenyan capital, which is home to numerous nation's embassies, including the HOK-designed US Embassy. It contains diplomatic and consulate services for the Swiss government.

The embassy's form is designed as an extension of the 2.5-metre-high perimeter wall, which was required to enclose the site for security reasons.

According to Roeoesli Maeder Architekten, this wall provided a "contradictory but exciting starting point for the required representative facility for a modern, open Switzerland".

The building extends away from the wall and turns to form a spiral shape, with both elements designed to appear as a single architectural construction.

The perimeter wall and the embassy are built from dyed exposed-concrete in a red-brown colour, meant to represent the "coffee soil" earth that Nairobi is built on, which owes its colour to the high iron content.

At the embassy's entrance, where it connects to the wall, the building has a single storey above ground. This section of the building contains the publicly accessible consular facilities.

As the building extends from the wall, the slopping ground drops away to reveal a two-storey structure, which contains the diplomatic areas and offices.

Large concrete projections provide shade for the windows in this section of the building, allowing the offices to have views uninterrupted by shutters. 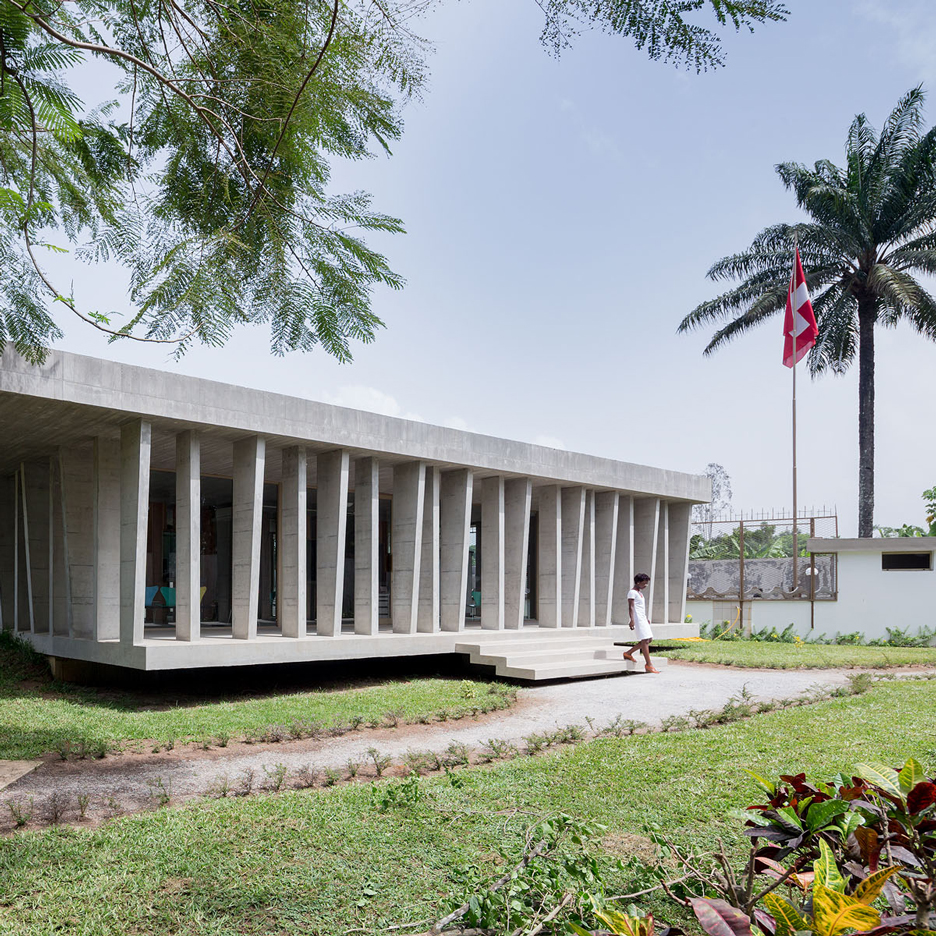 The scale and thickness of the concrete walls were determined by the amount of material needed to provide adequate thermal storage mass so that the building can be operated without heating or air conditioning.

A central reception hall connects the two storeys of diplomatic offices, with the single-storey, more public wing of the building.

This space and all the building's public areas, including the visa waiting area, have exposed concrete walls and floors made from polished concrete.

Each of the office's has large glass windows with an opening panel to allow natural ventilation.

The floors in these offices and the meeting rooms are made from solid eucalyptus parquet tiles, which according to the architect is the only sustainable wood available in Kenya.

Switzerland's other notable embassies include its home in the Ivory Coast, which Localarchitecture created by extending a 1960s villa.

Photography is by Iwan Baan, unless stated.