Barcelona-based studio EMBT has revealed images of a mass-timber metro station, which is under construction in the Centro Direzionale area of Naples.

The Naples Underground Central Station is being built in a neighbourhood designed by Japanese architect Kenzo Tange as part of a major upgrade to the city's infrastructure.

The studio, which is led by Benedetta Tagliabue, chose to build the station from wood to create an organic contrast to 1970s district.

"Kenzo Tange designed Centro Direzionale and he built a very Kenzo Tange-type of city with reflective skyscrapers and a piazza, very 1970s, very clean," Tagliabue told Dezeen. "It didn't work because it's so different from the rest of Naples."

Instead, Tagliabue's design was informed by older parts of Naples.

"It's a place where there are a lot of offices and a lot of business space but at five o'clock at night, it's deserted and very dangerous," she said.

"So the idea of making a new station there and connecting with the new subway line was also to try to introduce a piece of nature and a piece of the original part of Naples into this artificial piece of the city."

The swooping new station is being built on top of existing underground lines, replacing a previous building that was little more than cover for the staircase down to the metro platforms.

"We are working on an existing series of platforms and if you put more weight on top, you never know how much you can put," Tagliabue explained.

"Wood is a very light material, and it combines very well with the pre-existing structures."

"We matched the steel part of the concrete to make the base of the new columns, and then the rest of the column is totally made in wood."

The 10,000 square-metre station's signature shape is formed from glued laminated timber. The width of the rail tracks below is reflected in the width of the undulating vaults.

"We love vaults," Tagliabue said. "It's a great shape that works with most materials – vaults were first made with stone and then with ceramics, and I think it's also efficient with wood."

"Especially laminated, because you can give any shape to the beam that you want," she added.

The vaulted ceilings are also a nod to classic train stations that are often vaulted, while the shape of the station was intended to create the feel of a "walk in the wood".

"In a way what we are trying to achieve here is a kind of a new organic piazza, like being able to walk in a wood when you are in this very artificial business centre," Tagliabue explained.

However, the overall project has seen a number of stations delayed due to archaeological finds in the ground, including a design by Studio Fuksas that will now also act as a museum after an ancient Roman temple was found on its site. 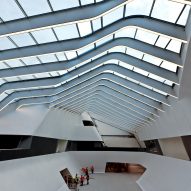 The Centro Direzionale station did not have the same problem, as it is in a newer part of town, but construction was shut down due to the coronavirus pandemic and Tagliabue says there have been other changes and delays.

"We also had a garden, which now they are trying not to build – budget is always a problem," Tagliabue said. "It's been two years of not building anything because of the coronavirus."

"Naples is not an easy place for maintaining timetables," she added. "I really hope they're not going to cancel the garden, because it's really important and it shows that we're trying to make it into a natural place."

The finished station is also supposed to feature a piece of art on its roof that will depict a face from an archaeological piece found in Pompeii, in a nod to both the art and architecture in the project's slogan.

The exact completion date of the Centro Direzionale station has not yet been announced.

"We started the project in 2004; infrastructure is very slow," she said. "And the Naples way of doing it is not so easy, so you have to be very patient."

"I think because of this station, we won another station in Paris in 2014, 10 years after [the Naples station] and I'm sure the one in Paris will finish before the one in Naples."

Other Naples infrastructure projects designed by well-known architects and designers include a high-speed rail station by Zaha Hadid and another station that was designed as part of the underground project, the University of Naples Metro Station by Karim Rashid.

Photography is by Paolo Fassoli.