Zaha Hadid Architects has completed the first section of a new high-speed train station on the outskirts of southern Italian city Naples, which is set to open this weekend.

Napoli-Afragola High Speed Train Station was conceived as a bridge, with the concourse elevated above the train tracks. London-based Zaha Hadid Architects (ZHA) envisions that it will be used as a piece of infrastructure by not only passengers.

The station will act as a "gateway to the south of Italy", providing a key interchange hub for four high-speed train lines linking the north and south of the country. It will also be served by three inter-regional lines and a commuter line.

Set 12 kilometres north of Naples' centre, it is expected to ease congestion in the city, as well as improving both local routes and long-distance lines that link with the rest of Europe. One high-speed service will link Naples with Rome in less than an hour.

The body of the space is formed from ribs of steel, while its walls are clad in panels of solid-surface material Corian. A row of skylights runs across the roof of the building, bringing natural light down into the concourse. Coupled with natural ventilation, and roof-mounted solar panels, the skylights help to minimise the station's energy usage.

An atrium in the centre of the elevated concourse will be surrounded by cafes and restaurants, while the length of the space will be lined with shops.

"The design enlarges the public walkway over the eight railway tracks to such a degree that this walkway becomes the station's main passenger concourse – a bridge housing all the services and facilities for departing, arriving and connecting passengers, with direct access to all platforms below," said the studio.

The structure is supported by a reinforced concrete base, developed using the same technologies as the team employed for the MAXXI Museum in Rome – replacing wooden formwork with prefabricated steel units, and creating double-curves by using CNC-milled polystyrene models.

Train services will begin to operate from the station on 11 June, with 18 high-speed trains initially laid on, increasing to 28 services when the station fully completes in 2020.

Rail travel has risen by 50 per cent in the region in the last 10 years, so it is expected that 32, 700 passengers will pass though the station each day.

"We wanted to build a station that is not only for a transit but which, over time, will be a source of renewal for the south, creating jobs and growth," he said.

"With this inauguration, we send a message that Italy is moving, the country is growing, here is a wonderful combination of artistic and engineering expertise," added Italian prime minister Paolo Gentiloni, who recently inaugurated the building.

The station was one of over 30 projects already in the pipeline when ZHA founder Zaha Hadid died last year. As one of the world's most successful architects, she was awarded the Pritzker Prize and the RIBA's Royal Gold Medal.

As one of the most searched-for architects on Dezeen, she came top in the inaugural Dezeen Hot List. She was also recently memorialised in a Google Doodle. 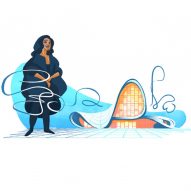 The firm, which is now led by Hadid's former partner Patrik Schumacher, recently unveiled its plans for a residential complex on Mexico's Riviera Maya and a greenhouse-like technology hub to accompany its design for the world's first wooden football stadium.

Photography is by Jacopo Spilimbergo.