Mexican studio Escobedo Soliz has renovated a family's residence inside a 1940s housing complex that was modelled on Le Corbusier's Radiant City masterplan.

The project entailed the renovation of an apartment in the Centro Urbano Presidente Alemán, or CUPA, a notable housing project in Mexico City's Del Valle neighbourhood.

It was the first modernist residential complex in Mexico, and it was among the first social housing experiments in the world, according to local studio Escobedo Soliz.

Completed in 1949, CUPA was commissioned by the government to address a housing shortage. It was designed by architect Mario Pani, who based his scheme on Le Corbusier's Radiant City, an urban design concept that featured residential towers set among green space.

CUPA was built in two years and set a new record for high-rise construction in Mexico, the architects said.

The complex consists of 1,080 apartments that are distributed across six towers and six smaller buildings. There are five different types of units, ranging from 48 to 76 square metres.

"On the ground floor, the buildings are equipped with urban infrastructure such as commerce spaces, sport facilities, schools and green areas for its inhabitants," the architects said.

"The buildings have a robust and modular structural system of concrete beams and columns that avoid structural walls and allow flexibility to reconfigure the interior of the apartments."

Escobedo Soliz was tasked with updating a 55-square-metre, two-level apartment for a couple with two sons. The family had been living in the unit for 15 years.

The upper level of the unit – called the access level – held a kitchen and dining room and totalled 12 square metres.

The 43-square-metre lower floor encompassed an open room with three beds, a television and a sofa, along with an enclosed bathroom and laundry room. Bikes and storage boxes were tucked under the stairs.

The goal of the renovation was to provide more privacy and storage space, along with upgrading the floors, surfaces, doors and windows.

To make more space, the team modified the staircase.

"Our proposal intervenes the original wooden staircase by making it steeper and shorter to gain area in the access level and gain height in the dead space below the staircase," the architects said. 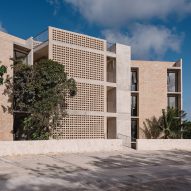 "By increasing the floor area on the access level, we were able to grow and build a new dining room, relocate the new kitchen, and generate a laundry room and bike storage behind the new kitchen."

On the lower level, the space under the stairs was converted into a television room. The bathroom was reconfigured and fitted with new cabinets and tile.

In the open area, partitions with integrated storage cabinets were added to form two separate bedrooms.

Wooden elements were also used to form desks in each bedroom and a new bunkbed in the children's room. The team also created built-in storage furniture that was originally proposed for the units in 1947 by Cuban designer Clara Porset, who worked in Mexico.

In certain areas, solid walls were replaced with glass blocks, helping increase the amount of light in the apartment. The team also swapped out dark linoleum floors with white terrazzo, and removed plaster from beams and the ceiling to reveal the concrete formwork.

The renovation also included new lighting, the restoration of original gates, and a new galvanised steel ceiling underneath the neighbour's staircase to provide protection from recurring water leaks.

Founded by architects Pavel Escobedo and Andrés Soliz, Escobedo Soliz has completed several residential projects, including an inward-facing house in Mexico City that consists of two brick arms that flank a central patio.

In 2016, the firm won the MoMA PS1 Young Architects Program contest and installed a web of brightly coloured rope at the museum's courtyard in Queens, New York.

The photography is by Ariadna Polo.