Architecture studio Adjaye Associates has designed a supertall skyscraper in New York, which has a series of cantilevers to give it a dramatic form.

Named Affirmation Tower, the skyscraper was designed for a 1.2-acre vacant plot of land at 418 11th Avenue in Manhattan where New York State has issued a Request for Proposals (RFP) in order to fill the site.

Adjaye Associates designed the 1,663-feet-tall (498-metre) supertall skyscraper – a building over 300 metres – to cantilever outwards five times so that the upper levels are much larger than the lower levels. This would give it an inverted appearance compared to a traditional skyscraper.

Outwardly defined by these stepped blocks, the building would include two hotels and office space, as well as an ice skating rink and an observation deck.

Local developer Peebles Corporation has submitted the supertall to the Empire State Development Corporation in a bid to build the skyscraper on the vacant site, which is called Site K.

It is positioned next to Manhattan's Javits Center, one block away from the city's High Line, as well as the Hudson Yards real estate development and Number 7 subway line.

If built, the project would be Adjaye Associates' tallest tower to date, and would also be the second tallest building in Manhattan after One World Trade Center.

According to the studio it would be the first skyscraper built by a team of Black architects, developers, lenders and builders in New York City's history.

There are plans to house the headquarters of the NAACP's Mid-Manhattan branch within the building. 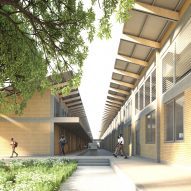 "Unfortunately for most of New York's history, African-Americans and people of color have been rendered as mere economic tourists who gaze upward at one of the greatest skylines in the world with the intrinsic knowledge they will never be able to participate in what really makes New York unique," said Rev Dr Charles Curtis, Head of NY Interfaith Commission For Housing Equality.

"The awarding of this project to this team will send a statement across the globe that architects, developers, engineers and financial professionals of color are now full participants in this great miracle of global capitalism called New York City."

The supertall would be the second New York tower designed by Adjaye Associates following 130 William, a concrete residential skyscraper designed by the firm, which was founded by Ghanaian-British architect David Adjaye in 2000.

The building would be the latest in a series of supertall skyscrapers built in New York with buildings over 300 metres designed by BIG, Foster + Partners and SHoP currently under development in the city.

The images are courtesy of the Peebles Corporation.