Season 0 is the debut collection curated with The Fabricant's Studio platform, where users can create virtual couture as NFTs with fashion brands and creatives.

The collection is being exhibited today during digital fashion house The Fabricant's guest editorship for Dezeen 15 – an online festival to celebrate Dezeen's 15th birthday.

As part of the event, The Fabricant's co-founder Amber Slooten discussed the company's manifesto for the future of digital fashion in a live interview with Dezeen editor-in-chief Marcus Fairs.

A total of 50 pieces by 50 individuals users of The Fabricant Studio were made for the Season 0 collection.

Each garment is one-off and minted as an NFT, meaning it is available to trade and wear in various environments in the metaverse – an emerging digital universe.

NFTs, or non-fungible tokens, are digital certificates that indicate the ownership and authenticity of digital assets. They are individually recorded or minted on a blockchain, allowing them to be bought, sold and collected.

In Season 0, each item of virtual clothing derives from one of six blank templates, or "master garments", created by different brands and creatives.

Users of the platform, they customised these master garments with their choice of 25 unique digital fabrics that were developed by The Fabricant exclusively for the platform. 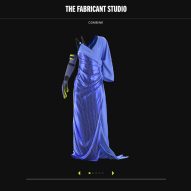 The Fabricant Studio "allows anyone to become a digital fashion designer"

"The beauty of the 3D digital fashion world is there is no definitive iteration of a garment; looks can be remixed eternally and we expect to be inspired right back with other visual points of view on our collections," said The Fabricant.

"Each creator also comes with a different cultural perspective and we wanted this to be part of the platform from the get-go," it told Dezeen.

A genderless robe called The Pluriform was The Fabricant's contribution to the collection.

Mengze Zheng, a digital fashion designer based in Beijing, designed a digital jacket called Gnosist, while Berlin-based designer Taskin Goec offered the Tario Dress, a garment that pays homage to couturiers of the 20th century.

Every garment minted in Season 0 will soon be open to bids in an auction during Flow Fest – an online event showcasing the various projects built on the Flow blockchain, such as The Fabricant Studio.

Other digital fashion collections launched by The Fabricant include the gender-fluid RenaiXance created with RTFKT and the Animator Overcoat, a piece of unisex virtual haute couture designed with Toni Maticevski that is decorated with claw-like spikes.

The Fabricant Studio's next season will launch on 30 November and be open for anyone to join, while new brands and creatives are invited to drop master garments.