On day three of the Dezeen 15 festival, Amber Slooten of digital fashion brand The Fabricant explained how technology could create an equitable fashion industry that rewards talent regardless of background.

The Fabricant's manifesto proposed the use of technologies such as blockchain and NFTs to establish a new creative economy "where our financial rewards are finally equal to our talent".

"In this digital future, a kid in Dakar stands as much chance as a kid in Paris of becoming an influential fashion force, with the tools to bring their ideas to life and a network of supporters that promotes, distributes and sells their work," the manifesto states. 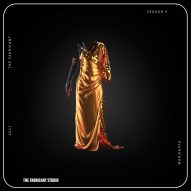 "In this future, a kid in Dakar stands as much chance as a kid in Paris" says Amber Slooten

"We'll call it the RenaiXance," it continues. "A new era where we become one another's most vocal cheerleaders, giving back to our fellow creatives while raising one another up and enabling those with fewer resources."

To coincide with Slooten's contribution to Dezeen 15, she has today launched The Fabricant Studio, a new platform that "allows anyone to become a digital fashion designer".

The Fabricant has also unveiled Season O, its own debut collection of digital garments created with the new platform.

The Fabricant was founded in 2018 by Slooten, Kerry Murphy and Adrianna Hoppenbrouwer to create clothes that only exist in digital spaces. Recent projects by the digital fashion house include a piece of unisex virtual haute couture and the gender-fluid RenaiXance collection.

Dezeen 15 is a three-week digital festival celebrating Dezeen's 15th birthday. Each workday, a different creative will present a manifesto setting out an idea that could change the world over the next 15 years.

The portrait of Slooten is by Valentina Vos.