Speaking live from Nairobi on day four of the Dezeen 15 digital festival, Kabage Karanja and Stella Mutegi of Cave Bureau set out their vision for a new infrastructure for their city that will address colonial and imperial injustices.

Their proposal, which is presented in a video and a written manifesto, involves creating a form of "reverse futurism" that combines ancestral heritage with contemporary architecture.

"We imagine a new kind of infrastructure we call Cow Corridors for the first inhabitants of the city," they write in their manifesto.

"This is a time where the Maasai citizens of Nairobi will no longer be arrested for bringing their cattle to graze in their ancestral lands, a remnant of past colonial laws of the county government." 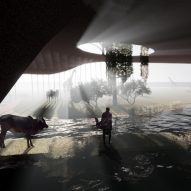 Cave_bureau is a Nairobi-based architecture and research practice. It was founded by architects and "spelunkers" Stella Mutegi and Kabage Karanja in 2014 to lead geological and anthropological investigations into architecture and nature.

It is currently presenting an installation called Obsidian Rain in the dome of the Central Pavilion in the Giardini at the Venice Architecture Biennale.

The Dezeen 15 festival features 15 manifestos presenting ideas that can change the world over the next 15 years. Each contributor will also take part in a live video interview.

The photograph is courtesy of Cave Bureau.