Billionaire investor Charles Munger's design for Munger Hall, a much-criticised student dormitory at the University of California, was informed by Le Corbusier and will "last as long as the pyramids," he has claimed in an interview defending the project.

Munger defended his vision for a 1.68-million-square-foot (156,000-square-metre) building, which would house 94 per cent of its 4,500 students in windowless rooms, in an interview with American magazine Architectural Record.

The controversial scheme drew global attention earlier this week when architect Dennis McFadden stepped down from a University of California committee in protest at the design.

Munger eliminated "errors" made by Corbusier

Speaking to the Architectural Record, 97-year-old Munger said that his design for the student housing block at University of California Santa Barbara was based on the iconic Unité d'Habitation modernist housing project in Marseille by modernist architect Le Corbusier.

He claimed that he improved Le Corbusier's design, which was "too narrow to make the spaces interesting".

"I've fixed that," he said. "We took Corbusier's errors and the errors in university housing and eliminated them one by one."

Architect McFadden resigned as he said he was "disturbed" by the design of the building, which would have "virtual" windows in almost all rooms, according to The Washington Post.

This idea to replace windows with virtual windows came from Disney Cruise ships, Munger explained in the Architectural Record interview.

"We had a window shortage," he said. "So we just copied what Disney Cruises did. The way Disney does it, the window is really a television set. Those work beautifully on the ships."

"But I wanted to have a spectrum of sunlight, so with a curtain hanging over it you couldn't tell if it was artificial or real," he added.

"I figured out how to do that. Programming the lights to copy the sun was too expensive. So we will give the students knobs, and they can have whatever light they want. Real windows don't do that."

As well as the lack of windows, the number of entrances and exits – 14 for the entire building – has also raised eyebrows. Munger said the design follows safety regulations.

"I'm a nut about safety," he said. "There are enough exits to satisfy all of the codes, and they're way bigger than normal." 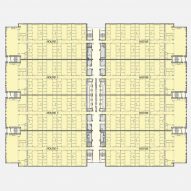 Additionally, he said the material used for the dormitory has its own safety advantages. "It's a sprinklered concrete building," he told Architectural Record.

"Do you know how much loss there has been to fire in the history of sprinklered concrete buildings? Approximately zero."

The concrete building will be fabricated off-site, which Munger says will make it "last as long as the pyramids."

Though Munger has no architectural training, he believes that buildings similar to Munger Hall will "sprout up all over America". However, he doesn't believe universities should normally let donors choose the architect of its buildings.

"If you allow the donor to pick the architect, which has been done in many places, the buildings look like shit," he told Architectural Record.

"But this is a special case. I've been doing it for a long time and I know more about it. And I have a very good architect helping me, Navy F Banvard [a principal at VTBS Architects], who's one of California's biggest apartment house architects."

Munger has previously contributed buildings to other campuses, including Stanford and the University of Michigan.

The University of California Santa Barbara building has yet to be approved by the California Coastal Commission.