Pakistani architect Yasmeen Lari has developed a mud and lime-plaster stove that counters the unfavourable environmental and health consequences of cooking with open fires.

Lari first developed the stove back in 2014 through Heritage Foundation of Pakistan, which she co-founded with her husband. At the time, the foundation had been working with non-literate women residing in suburban and rural regions of Pakistan to raise awareness of the implications of open-flame cooking.

As well as polluting the air with carbon, regularly preparing meals over open fires increases the risk of domestic fires, skin burns and serious respiratory or heart diseases. The need for firewood also promotes deforestation and can have family members searching for logs for hours at a time.

Lari's eco-alternative, named Pakistan Chulah Cookstove, is instead fuelled by agricultural waste like cow dung, or sawdust bricks, which the architect says cuts the use of firewood by 50 to 70 per cent.

The Pakistan Chulah Cookstove is being showcased as part of Lari's contribution to the Dezeen 15 festival, alongside a manifesto she has written that calls for a new form of social architecture that benefits disadvantaged people. Lari will speak about her manifesto and her work in a live interview with Dezeen editor-in-chief Marcus Fairs.

Made from locally-sourced mud and CO2-absorbing lime plaster, the stove comprises a fire chamber, an air regulation pipe, a hand-washing area, a ledge where cooking utensils or dinnerware can be kept, and a chimney which keeps any smoke incurred from the fire to a minimum.

The whole structure sits atop a chunky raised platform, providing a clean area for families to enjoy their meals. This platform also means that, in the event of a flood, the stoves are less likely to be washed away. 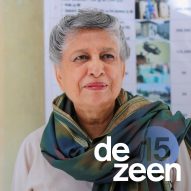 The task of rolling out the stoves to rural communities was given to "barefoot entrepreneurs". They are a result of Lari's Barefoot Social Architecture programme which, in part, seeks to give impoverished Pakistanis profitable livelihoods by providing them with paid work on eco-friendly projects.

Heritage Foundation of Pakistan would pay the entrepreneurs the equivalent of two dollars for each woman they trained in building a stove, and cover the six-dollar cost of materials, culminating in just an eight-dollar spend per stove.

In 2018 the stove won the UN World Habitat prize and by the end of 2019, over 60,000 stoves had been built. The foundation and Lari soon realised that the stove made a wealth of other positive impacts.

"The stove improves cooking efficiency by around 25 per cent," the architect explained. "It also becomes a focal point in the village where women from neighboring houses could meet and interact, strengthening social ties."

Many of the women also used leftover plaster or brightly coloured paints to create intricate patterns on the front of their stoves, turning each one into a "spectacular work of art".

Families additionally use the stoves as a way to keep warm during the winter months – Lari is hoping to make a new model that's capable of directing heat into the rooms of rural homes.

Since closing her own practice in the year 2000, Yasmeen Lari – who was Pakistan's first female architect – has become known for her socially conscious work. As well as developing the chulah stove, she has also overseen the build of thousands of zero-carbon shelters.

Lari is one of 15 creatives presenting a manifesto for a better world at Dezeen 15, a digital festival celebrating Dezeen's 15th birthday. Others participating include Winy Maas, Es Devlin and Neri Oxman. Read Lari's manifesto here and see details of all the participants here.