London and Mexico city-based Aidia Studio has proposed a mosque for Preston, England, that is designed to be a "quintessential archetype of Islamic Architecture".

If built the New Preston Mosque would be located on the northern outskirts of Preston at the top of a small hill.

Its elevated position aims to create a symbolic journey of ascension to the religious building from the surrounding area.

"Our approach places the mosque at the highest point on the site, in doing so, apart from cultivating the symbolic gesture of the ascendance, we are able to define a journey which starts in the landscape," Aidia Studio co-founder Rolando Rodriguez-Leal told Dezeen.

The studio designed the mosque and its surrounding site on a grid that aligns the structure and its internal architectural elements with landscaped areas and a car park.

It was designed around a repeated block system that used a collection of cascading lancet arches – an arch with a pointed tip, used across Islamic architecture – to create its form.

A rear row of 4.7-metre-wide arches stretches across the rear of the building while shorter, half-width arches are positioned at the front of the building.

Cast bronze mashrabiya screens – a decorative screen typically found in Islamic buildings – will be fitted between the arches to allow natural light into the interior of the mosque.

"Perhaps the most poetic of all Islamic architectural archetypes, the mashrabiya filters the light and sets the stage for a dimmed ceremonial atmosphere," said Rodriguez-Leal.

"We have designed a pattern that reinforces the fractal linearity of the overall scheme. The mashrabiya cassettes, intended to be cast bronze, close the vaults along the north west-south east axis creating a kinetic play of lights and shadows across all three levels of the mosque." 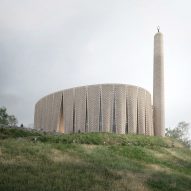 A 32-metre tall minaret tower will be situated beside the mosque and will serve as a landmark for Preston.

Visitors will be able to enter the mosque at the front of the structure between a collection of small arches.

A lobby at the front of the building will serve as a transitional space providing access to a library, a large prayer room, plazas and offices.

Separate entrances for men and women will be placed at either end of the building and lead to dedicated men's and women's only prayer rooms. The main prayer hall, located on the ground floor, occupies the rear of the building.

The landscaped car park has a stepped, cascading look that was designed to not resemble its function. It will use strips of slate and stone that intertwine to create a panelled design between grassy areas.

"Possibly one of the biggest challenges we faced was to design a car park which doesn't resemble one," said Rodriguez-Leal.

"Our approach aims to blur the boundary between parking and landscaping, and we do so by establishing a playful array of shifting slates, plates, and benches."

The design for the New Preston Mosque was part of an international competition held by the Royal Royal Institute of British Architects.