British designer Es Devlin has created the Conference of the Trees as the venue for The New York Times Climate Hub, which is running alongside the COP26 climate conference in Glasgow.

It forms the setting for The New York Times Climate Hub at the SWG3 Arts Centre in the Scottish city, which is hosting a series of talks during the 12-day main conference.

Speakers to have appeared in the forest so far include climate activist Greta Thunberg, former US vice president Al Gore and Scottish first minister Nicola Sturgeon.

Trees and plants have been positioned around a low-lit clearing filled with second-hand wooden school chairs for the audience.

The number of trees and plants is significant, matching the 197 nations attending COP26 having signed the 1994 United Nations Climate Change treaty.

Devlin hoped that the tree-filled event space will have a positive impact on the talks that take place.

"There's a quality of air and smell in the room that the trees bring that has an effect on the quality of conversation," she told Dezeen.

"It's something we have all experienced – a conversation during a walk through the forest, with eyes both looking forward to the future and focused on non-human species, has a very different tone to a conversation had face to face across a table where the focus is a human form within a rectilinear frame."

The artist and set designer previously told Dezeen that the project was intended to contrast with the atmosphere of traditional conference rooms, which tend to be top-lit and rectilinear.

"I wanted to view the conference of the parties from the perspective of a non-human species bearing witness to the decisions the humans might make," she said.

Trees have become a recurring theme in Devlin's work, which she traces back to reading Richard Powers' 2018 novel, The Overstory.

Earlier this year she designed the Forest for Change at the London Design Biennale, which saw 400 trees temporarily fill the courtyard of London's Somerset House in a bid to raise awareness of the United Nations' climate initiative Global Goals. 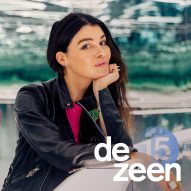 Similarly, in a manifesto produced for the Dezeen 15 digital festival celebrating Dezeen's 15th birthday she imagined a future in which all parked cars in city centres have been replaced with trees by the year 2036.

Her studio is now planning a temporary forest of 1,000 trees in Miami, which will be planted in December.

Architect Philip Jaffa and green infrastructure specialist Scotscape, which both also worked on the Forest for Change project, assisted Devlin's studio with Conference of the Trees.

As with the Somerset House installation, the flora making up Conference of the Trees will be replanted once COP26 has concluded with native species chosen to suit their destination at a community garden in Glasgow.

The photography is by Craig Gibson.

Conference of the Trees will be held at the New York Times Climate Hub at the SW3G Arts Centre in Glasgow from 3 to 11 November. See Dezeen Events Guide for an up-to-date list of architecture and design events taking place around the world.