Architect Hiroshi Nakamura incorporated around 700 windows donated by the local community into the facades of this waste recycling facility in the town of Kamikatsu, the first place in Japan to pass a zero-waste declaration.

The Kamikatsu Zero Waste Center is made predominantly using waste materials and features on the shortlist of the sustainable building category for Dezeen Awards 2021.

Tokyo-based studio Hiroshi Nakamura & NAP was commissioned by the town of Kamikatsu to design an environmentally friendly facility that encapsulates the community's values as pioneers of waste processing.

In 2003, Kamikatsu became the first municipality in Japan to issue a Zero Waste Declaration, which means that all waste produced by its inhabitants is recycled or reused rather than being sent to landfill or for incineration.

The town, which is located an hour's drive from the nearest city, Tokushima, was forced to take action when legislation decreed that its incinerator could no longer be used due to unsafe levels of dioxin emissions.

The community gradually developed a system that sees waste separated into 45 categories, with a recycling rate that surpasses 80 per cent.

The recycling centre provides a focal point for recycling activities and allows those involved to share their ideas and values with visitors through the inclusion of community hall, reuse shop, activity space and hotel.

"Kamikatsu Zero Waste Center embodies the principle of Zero Waste as an earth-friendly complex facility that adds the functions of education, research and communication to a waste-sorting treatment plant, aiming to recreate community and develop the region," Nakamura explained.

The facility features a horseshoe-shaped structure with an extended section at one end that flanks a car park. The building's shape creates a drive-through space providing easy access to a stockyard sheltered beneath a metal-covered roof.

A circular building housing the four-room hotel forms the dot of a question mark when the building is viewed from above. The question 'Why?' was printed onto newspapers that incite consumption, which were then used as wallpaper inside the building.

"The '?' mark can be perceived only from high up in the sky," Nakamura pointed out, "but we instil our hope that this town questions our lifestyles anew on a global scale and that out-of-town visitors will start to question aspects of their lifestyles after returning home." 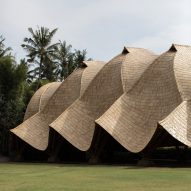 The reuse shop and an office are positioned centrally facing the entrance, with the separation area used by the town's residents and waste workers distributed around the curved section.

Kamikatsu's main industry was once forestry, but all that remains of this today are neglected cedar forests. Nakamura's studio worked with Yamada Noriaki Structural Design Office to design a structure using unprocessed cedar logs that reduce waste associated with squared-off lumber.

The logs are roughly sawn along their length to retain their inherent strength and natural appearance. The two sawn sections are bolted together to form supporting trusses that can be easily disassembled and reused if required.

The building's facades are made using timber offcuts and approximately 700 windows donated by the community. The fixtures were measured, repaired and assigned a position using computer software, creating a seemingly random yet precise patchwork effect.

Recycled glass and pottery were used to create terrazzo flooring. Materials donated by companies, including bricks, tiles, wooden flooring and fabrics, were all repurposed within the building.

Unwanted objects were also sourced from various local buildings, including deserted houses, a former government building and a junior high school that had closed. Harvest containers from a shiitake mushroom factory are used as bookshelves in front of windows in the office.

The involvement of the community in the facility's development helps to foster a sense of pride in the project and a stronger connection to the town's philosophy of recycling, reusing and reducing waste.

"The Kamikatsu Zero Waste Center serves not only as a benchmark of resident-engaging public architecture, but also to establish a direction for a sustainable society," Nakamura added.

Hiroshi Nakamura graduated from the Graduate School of Science and Technology of Meiji University in 1999 and worked for Kengo Kuma & Associates before founding his eponymous studio in 2002.

His projects aim to build an organic relationship between architecture, nature and people through an approach that combines influences from natural phenomena as well as human behaviour.

The studio's previous work includes a woodland retreat designed to resemble a cluster of timber teepees, and a wedding chapel featuring two intertwining spiral staircases that meet at a rooftop viewing platform.

Other projects that were shortlisted in the sustainable building category for the Dezeen Awards 2021 include Ibuku's bamboo gymnasium building and CplusC Architectural Workshop's house with an aquaponic system.