Day nine of the Dezeen 15 digital festival featured a live interview with Dutch designer Jalila Essaïdi, whose manifesto suggests that the push for more sustainable design solutions is misguided.

"We should design to optimally allow chaos to form potential symbiotic relationships with our trash," she writes in her manifesto called Consumerism, materialism and waste.

"Sustainable design strategies might seem to make sense in our current capitalist system," she writes. "Yet they merely pass the problem on to the next generation."

Instead, designers should "equip nature with the diversity of trash it needs to work its magic faster," she argues. Left to its own devices, nature will turn "poisons into pistons of exotic engines," writes the Dutch designer in her manifesto. 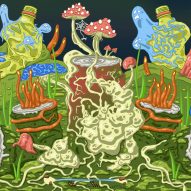 Jalila Essaïdi is a Dutch artist and inventor based in Eindhoven. She specialises in designing with bio-based materials such as recycled cow dung, which she used to create a fashion collection that explored how to turn waste into valuable products.

She is CEO of biotech company Inspidere BV and founder of the BioArt Laboratories arts foundation in Eindhoven that provides entrepreneurs access to a biotech laboratory.

The Dezeen 15 festival features 15 contributors presenting their manifesto ideas that could change the world over the next 15 years.

See the full line-up of upcoming and past contributors here.

The portrait of Essaïdi is by Mike Roelofs.