The carmaker kept the first generation Grandeur's original boxy shape while adding features such as pixel-style LED headlights and taillights.

Redesigned side mirrors, covered wheels and slide cladding were also developed for the model, named the Heritage Series Grandeur.

Inside, the car has been given a luxury makeover with burgundy velvet upholstery on the front of the seats reminiscent of the original's interiors and auburn napa leather on the back.

The buttons and dials of the dashboard were replaced with an ultra-wide touch screen display, while a single-spoke steering wheel and aeroplane-style gearstick are intended to retain a 1980s aesthetic.

Other touches include a hidden pop-out compartment for storing valuables in the centre console armrest and bronze-coloured lighting that mimics 1980s audio equipment.

The Heritage Series Grandeur's own sound system was developed by South Korean sound designer Guk-il Yu and uses 18 speakers. The brand claims the car's dashboard and centre console has been shaped based on the acoustics of concert hall architecture.

Hyundai described its approach to the design as "Newtro (newness + retro)".

The Heritage Series Grandeur has been built as a concept car to celebrate the original's 35th anniversary, as well as informing Hyundai;s future car designs, and so will not be mass-produced.

"As our designers conceive the future, it’s important to look back on what we've created in the past and find inspiration in it," said Hak-soo Ha, head of interior group at the Hyundai Design Center. 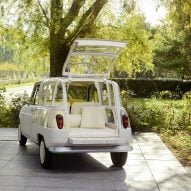 "With the Heritage Series Grandeur, our designers have reinterpreted an important part of Hyundai’s history as a wonderfully unique blend of vintage and contemporary that reflects the boundless possibilities of our [electric vehicle] era," he added.

Hyundai previously undertook a similar project with its 1975 hatchback model the Pony and intends to continue its Heritage Series with more concept remakes in the future.

The manufacturer's parent group, Hyundai Motor Company, was founded in 1967. It is working on a flying taxi in partnership with Uber and declared this summer that flying cars will be in cities by 2030.

Images are courtesy of Hyundai Motor Company unless stated.